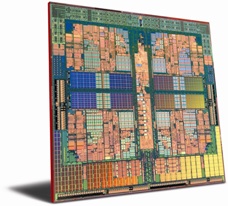 Well, the post-Macworld keynote slowdown in Apple rumors lasted a day. Today brings a hot one: A multi-core iPhone.

Imagination Technologies is set to announce its PowerVR SGX543, a multi-core graphics processing unit (GPU) tomorrow at CES, according to TG Daily. Apple enthusiasts may recognize the company: It was disclosed that Apple had invested $5 million in Imagination Technologies last month to gain a 3.6 percent stake in the graphics chip company. So naturally, the thought is that Apple will use this new GPU to power a next generation iPhone.

But more interesting is the assertion by ZDNet that the 3.0 version of the iPhone’s firmware will be tailored for a quad-core iPhone. It’s not clear if they’re talking about this GPU or the iPhone’s future central processing unit (CPU), which Apple may or may not be making itself following its acqusition of chipmaker PA Semi last year — or both.

A multi-core iPhone of any kind will obviously be more powerful than the current variety. And using this new multi-core GPU could take gaming on the iPhone, already a good experience, to a level much higher than that of the two sytems currently synonomous with mobile gaming: the Nintendo DS and the Sony PSP.