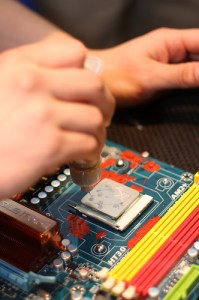 Advanced Micro Devices is taking a swing at Intel today with the launch of its Phenom II microprocessor for the consumer desktop market, as well as a new Dragon platform that will house the processors in a variety of new high-end computers.

The Phenom II is based on AMD’s new 45-nanometer manufacturing process, which will let AMD stay competitive with Intel’s newest chips. In the case of consumer desktops, analysts now believe that AMD will leapfrog Intel for the first time in a few years. The chips have larger cache memories — up to eight megabytes — and the processors start at 3.0 gigahertz. Previously, the fastest Phenom I chips could only hit 2.6 gigahertz. With the improvements, AMD says its new chips will be 20 percent faster than previous chips.

The company is unveiling the product at the International Consumer Electronics Show in Las Vegas next week, where AMD chief executive Dirk Meyer will be giving one of the keynote speeches.

The new chips will make AMD credible again at the high-end of the game PC market. The chips capitalize on a new production technology that comes along every couple of years for chip makers. The 45-nanometer technology lets AMD make smaller, faster, and cheaper chips because it shrinks the width betwen circuits, allowing for lower power and less material use. Intel launched its own 45-nanometer processors some time ago and refreshed its line-up in November. AMD launched its first 45-nanometer server chips in November.

AMD has shown that the new processor can be overclocked to 4 gigahertz with air cooling or 5 gigahertz in certain circumstances with liquid-nitrogen cooling. That shows the chip has plenty of headroom for future performance improvements. In gaming mode, the chips can run reliably at 3.5-gigahertz and 3.7 gigahertz.

The Dragon platform is a collection of key chips that PC makers can assemble into a computer. It includes the AMD Phenom II X4 processor, the ATI Radeon HD 4800 series graphics, and the AMD 7 series chip sets. With the graphics chips launched last year, the new machines based on Phenom II and the Dragon platform should be far faster than AMD’s previous line-up, with games running 40 percent to 180 percent faster. 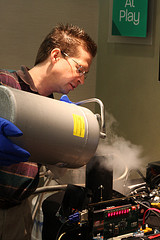 David Schwarzbach, AMD’s division marketing manager for desktops, said he hopes that do-it-yourself PC builders will come back to the AMD platform with the launch of the Phenom II. Many of those PC builders, who are often hardcore gamers, defected to Intel’s Core chips starting in 2006, when the world’s biggest chip maker pulled ahead of AMD in performance.

The picture here shows a gamer pouring liquid-nitrogen into a cooling system for a PC at a preview event AMD held in December. Schwarzbach said the company will likely bump up the performance of the chips as it proceeds with new versions throughout 2009. (That’s not always the case with designs that don’t have much design headroom, or room for improvement). That means it’s time for Intel to be at the top of its game.

The chips are in production and computer makers are announcing a variety of models today. They will be listed on AMD’s web site.