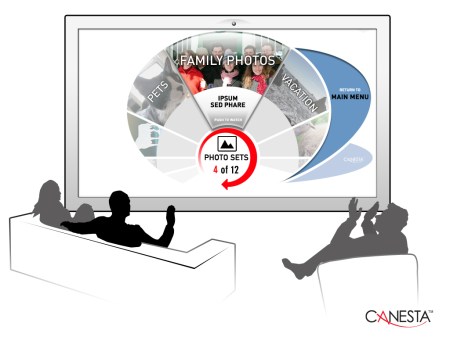 Canesta is announcing today it has teamed up with Hitachi to create a next-generation user interface for a TV that is similar to the way arm-waving controls the Nintendo Wii video game console.

Hitachi will use San Jose, Calif.-based Canesta’s 3-D sensor chip to power the first gesture-controlled TV set. The companies are showing a prototype today at the International Consumer Electronics Show in Las Vegas.

Hand-waving controls haven’t had the best history. Sony used a two-dimensional camera to detect gestures in its EyeToy games for the PlayStation 2 and PlayStation 3. But such cameras couldn’t capture the subtley of motions the way that a 3-D image sensor can.

Canesta has a single chip 3-D sensor that can detect gestures made with hands in the air. Hitachi will show the technology in its booth, where the sensor can detect motions at up to 9.8 feet away.

This could change the way people deal with complicated controls, simplifying the consumer electronics devices that are getting more and more difficult to use. A rapid wave of the hand can turn on a TV and a circular motion can change either the video source or a channel.

The Canesta technology can also discriminate between a user waving one hand or two. It doesn’t matter what kind of lighting conditions or decor exist in the room. It can even work outdoors. Hiroyuki Mizukami, chief technology officer of Hiatchi’s Consumer Electronics Laboratory, said people have shown a preference for the multi-touch and gesture interface of the iPhone. This, he said, is the next logical step. It puts us one step closer to the gesture-controlled computers of the 2002 Steven Spielberg film Minority Report. 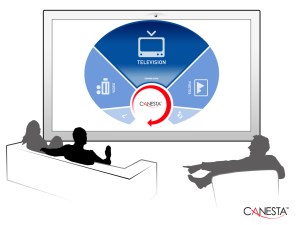 It’s not easy to do this, since the interface has to distinguish between a person and the environment. Canesta creates a “depth map,” detecting objects and how far away they are from the camera. Hence, it can tell the difference between a person waving their hands and someone with a T-shirt with waving hands emblazoned on it. The Canesta prototype works at 30 frames per second in terms of recording data and movement. That’s about as fast as the eye can see.

Jim Spare, chief executive of Canesta, sees a bunch of applications for the technology, including automotive safety applications, where a vehicle can benefit from a true 3D awareness of its surroundings. Canesta has a handful of gesture recognition competitors such as 3DV Systems, Sixense and PrimeSense. Spare said he did not expect revenue from the Hitachi deal this year, but he says there are other consumer applications in the works. 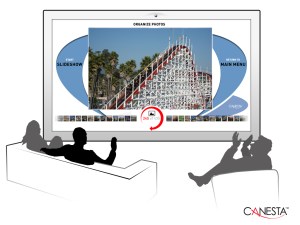 Canesta was founded in 1999 and has been granted 37 patents to date. It has raised $58 million
from Carlyle Venture Partners, Honda Motor Company, Hotung Capital Management, Korea Global IT
Fund (KGIF), Venrock Associates and others. The company is not currently seeking a round. Canesta has 30 employees.