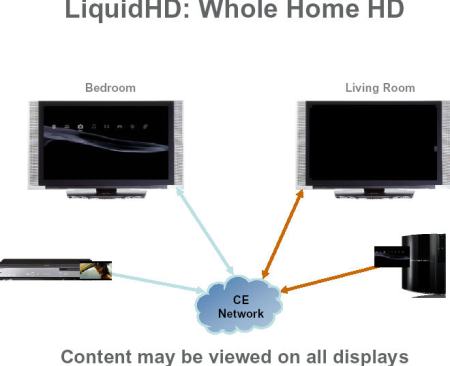 Chasing after an elusive quarry, Silicon Image is launching a technology today to network electronics in the home. Dubbed LiquidHD, the technology is aimed at uniting different networking protocols so that it consumers can more easily bring together their computers, consumer electronics, portable devices, and Internet connections.

Most devices in the home are still separated into different technology islands. If you want to watch satellite TV in your bedroom and living room, you need two set-top boxes that are wired to a common infrastructure. LiquidHD is a kind of Rosetta Stone to bring devices together.

With all the TVs in a household connected to the LiquidHD network, consumers could play a high-definition movie or a game on any TV set in their home. Silicon Image will try to make the LiquidHD technology into an international standard and already has big supporters, including Fox Studios.

It’s a tall order to network the entire home, largely because different methods work better in different homes. One attempt at a standard, Digital Living Network Alliance, has been trying for more than five years but is slow at winning adoption. In the past, consumers didn’t really need home networking. But that’s changing as people want to move high-definition video from one part of the home to another or connect new devices to the Internet.

Silicon Image, a publicly traded company based in Sunnyvale, Calif., has a fighting chance because it has a history of pioneering new technologies and getting the industry to adopt them. It created and helped standardize the high-definition multimedia interface (HDMI), which has become a common way of hooking up audio and video equipment to TV sets and computers.

HDMI cables and connectors first started shipping in 2003. Now, more than 800 companies use them, producing a steady stream of HDMI chip sales for Silicon Image, whose revenues are expected to be as much as $58 million in the fourth quarter. By 2010, there will be an estimated 1 billion HDMI devices in the market. The company also makes chips based on other standards such as Digital Video Interface (DVI) and Serial ATA (SATA) which are also used to connect devices to computers and consumer electronics.

The devices that LiquidHD could connect include TVs, computers, DVD or Blu-ray players, game consoles, set-top boxes, digital video recorders, and even portable devices. Silicon Image can handle video in the 1080p format at 24 frames per second and 60 Hz rates.

Each device would need a Silicon Image chip in it. You can imagine that LiquidHD could be built into HDMI chips that are already selling in the millions. The company can integrate the technology into new products and is also making a Sil6100 Micro Client chip that could make older TVs LiquidHD-compatible. Silicon Image also has a software development kit to put LiquidHD into devices that provide video sources.

LiquidHD is off to a running start. CableLabs, the research arm for the cable TV industry, gave it an award for best new technology of 2008. And Comcast chief technology officer Tony Werner, PRN, Liberty Global, and Thomson have given upbeat assessments of it. LiquidHD-enabled products are expected to hit the market as early as the second quarter of 2009. 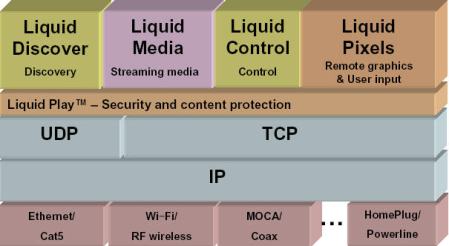 The LiquidHD standard is built on five separate technologies. Liquid Discover enables the network to detect new devices. Liquid Media lets a device stream video from one device on the network to any other connected device. Liquid Control provides for a universal remote control for all screens and devices. Liquid Play provides security, while Liquid Pixels guarantees image quality.

As you can see from the above image, the LiquidHD technologies are compatible with Internet infrastructure and don’t depend on any particular networking method, whether that’s through Ethernet networking wires, wireless, cable, or power socket Internet adapters.