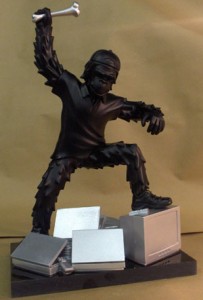 TechCrunch’s Erick Schonfeld emceed the event in San Francisco’s Herbst Theater (publisher Michael Arrington was feeling under the weather), and he was joined on-stage by some big-name speakers, including Y Combinator’s Paul Graham, Google’s Marissa Mayer, and Microsoft’s Ray Ozzie. Graham urged startups to “be a cockroach” in order to survive the economic nuclear winter, while VentureBeat Editor Matt Marshall asked Mayer what kind of startup she’d be interested in joining today. Mayer denied rumors that she was leaving Google, but said there are opportunities for big breakthroughs in mobile technology and new ways to interact with computers.

The audience got a musical overview of the year in tech from a capella singers The Richter Scales, and watched short videos produced by 1938 Media.

And here are the nominees, with the winners highlighted:

In accepting the “best overall” award, Facebook chief executive Mark Zuckerberg ended the evening on a note of hope. Pointing out that Google helped lift the economy out of the last downturn, he said: “I think a lot of the other companies that are up here have this ability to make it so that — despite how dark the times are now — we’ll be able to build something great. And we can be the next beacon of light to help us emerge from the tough times we’re in now.”

Update: Here’s a slide show of highlights from the ceremony and afterparty, compiled by Animoto.