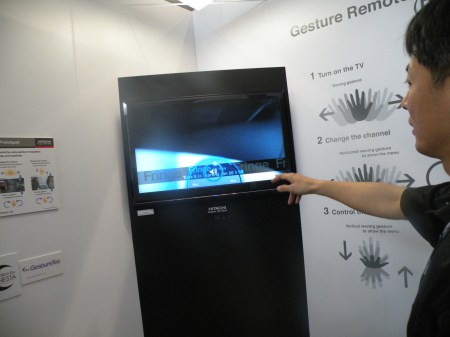 Gesture recognition is one of the most exciting new technologies at the International Consumer Electronics Show this week. A variety of companies — inspired by the Nintendo Wii’s gesture control and the iPhone’s multi-touch screen — developing new ways to interact with gadgets. Hand, arm or finger gestures — like waving your arms around in circles to make something happen on the screen — are being used in everything from phones to game consoles.

TV is a huge potential market for these technologies. TV remote controls are getting so complex that consumers need a less-intimidating way to navigate through all of the data — movies, stored TV shows, music, and pictures — that they can access on their connected TV sets.

Panasonic has its own EZ Touch remote with touch screens on both ends of a remote where you swipe your fingers across a screen. That’s a pretty simple use of gestures. But it’s quite possible that these remotes don’t go far enough. Some radically different approaches are being tried by the companies in the videos below. These new technologies require the development of sensors, user interface software, and hardware for making sense of the data coming in from the sensors.

Here are videos I took that may show you the future of TV. Are you ready to say goodbye to the remote control? These three demos at CES show how to use gestures to control the TV. The first video shows the Hitachi TV that is connected to a Canesta 3-D depth camera, which senses a moving object. You can wave your hands around in front of the camera to make things happen on the TV, like changing the channel or navigating the menu.

The second video is a demo of Orange Vallee’s new user interface for its interactive TV service in Europe. The parent company, Orange, is a cell phone carrier with 120 million subscribers. It also operates an IPTV network of more than 7 million subscribers. Here, the company shows the interface it developed using a depth camera from a Swiss company and software from start-up Softkinetic, which has been working on the technology for more than six years.

The third video is the demo by Sixense, a Los Gatos, Calif.-based company headed by Amir Rubin. The company has made a system with a magnetic amplifier that can emit weak signals which are detected by a remote magnet inside a control being held by the player. You can take a golf swing, fire a weapon, or otherwise immerse yourself in the actual gestures of a game to make things happen. Jeff Bellinghausen, chief technology officer, shows how the remote works with existing games such as Electronic Arts Tiger Woods golf game. I played Left 4 Dead, EA’s zombie shooter game, and had little trouble aiming at the zombies. It was trickier to stay oriented. But the shooter games are played with two remotes, one in the right hand for shooting and pointing the gun, and the other in the left hand for moving facing.

The controls are intuitive. When you want to melee with a zombie, you punch your hand forward. But I’m so used to playing with a controller that it takes getting used to. Analog Devices supplies some of the chips for the Sixense system, which may debut this year.

Which one is best? That depends on what you want to do. Hitachi’s demo showed someone standing up and waving their arms around. It’s more accurate than Sony’s EyeToy games for the PlayStation 3, but it could be tiresome. While Softkinetic allows you to sit on the couch, you still have to hold your arms up in the air. That raises the question: Do you want exercise or not? Your arms could get really tired if you hold them up. Some users may not want to do that at all. Others might want the workout.

We’ve covered a number of other gesture-recognition companies, including PrimeSense, GestureTek, Ball-it, Oblong and 3DV Systems, but I didn’t meet them at CES. GestureTek says it has a lot of patents in North America on gesture-controlled user interfaces. Apple has some patents related to multi-touch screens.

Of the videos here, you decide which one looks better in our poll.