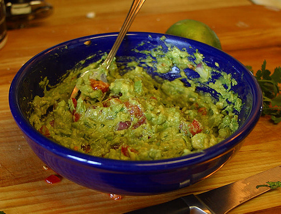 One largely untapped but potentially big market for mobile applications is in remote ordering. Think about it. Who wants to make a call or wait in line at a crowded fast food place, when you can place your order from wherever you are, on your phone? The Mexican-food chain Chipotle is apparently thinking the same thing, with its new iPhone app.

The app lets you use the iPhone’s touch screen to pick your food and even customize your order with things like “more meat,” according to the MacRumors iPhone Blog. Once you fill out everything you want, you pay via credit card and the order is sent to the closest Chipotle location, where you can pick it up. (Or, presumably, they can deliver.)

If this sounds familiar, it may be because designer Phil Lu did an excellent mock-up of a similar application for Starbucks last year. 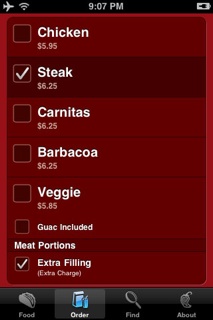 That app, which Lu made before the App Store was even launched, allowed you to order your favorite drink, customize it and pay for it without having to wait in the notoriously long Starbucks lines. The app even seemed feasible because Apple already had a deal with Starbucks through which a special Starbucks icon would show up on iPhone screens when you were in a store, showing the most recent songs played at that store and allowing you to buy them on iTunes with one click.

While fast-food chains obviously need some sort of infrastructure in place to handle orders made from a mobile device, many already have online ordering systems that can probably be adapted for this purpose, as MacRumors notes.

The Chipotle Mobile Ordering app is available for free in the App Store. But oddly, right now it says it’s not available in the U.S. My only thought is that perhaps this is because it will lead to a nationwide guacamole shortage.