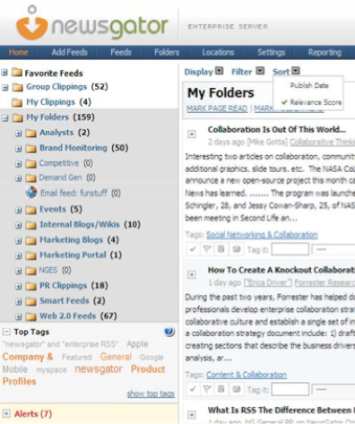 RSS services provider Newsgator has focused much of its effort over the past year on developing products for businesses, and that effort seems to be paying off. The last two quarters were the company’s most profitable ever, partly because it has landed major clients across industries like finance, manufacturing and aerospace. It has also closed a $10 million sixth round of funding from Masthead Venture Partners, Mobius Venture Capital and Vista Ventures, and existing investors.

RSS stands for Really Simple Syndication, a formatting standard whereby a web site can automatically push new data (like this blog post) out to any other service that is set up to track RSS feeds. By aggregating feeds, anyone — whether an individual or a division of a multinational conglomerate — can quickly and easily keep track of what’s happening on most any web site they care about.

While free web-based rivals like Google Reader are popular with your average RSS-reading consumer, Newsgator’s enterprise software can be hosted locally and customized to integrate with other software developed by clients. It includes features designed for groups, like reports on who is reading what and how often (see screenshot). Businesses like these features because they want to control their own data and deploy new software products together with products they’ve implemented in previous years.

When we covered Newsgator’s previous funding round, nearly a year ago, the company noted that it was working with a hundred mid- to large-sized businesses. Today, here’s who the company says its clients are:

The company also offers a range of free RSS readers, including an application that lets you read RSS feeds on your iPhone. It has raised $39 million to date.

[Update: A bit of controversy has broken out about the state of “Enterprise RSS.” Marshall Kirkpatrick of ReadWriteWeb wrote a skeptical post earlier today, questioning how much usage (and money) NewsGator was getting with business customers. Brad Feld, an investor in Newsgator has fired back with this post discussing NewsGator’s position today. More in comments, below.]