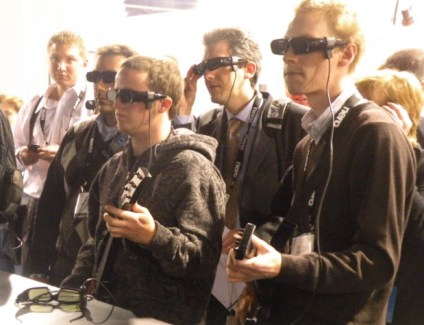 Before my trip to the Consumer Electronics Show in Las Vegas last week, I predicted that TV and computer makers would be hawking 3-D options in order to differentiate themselves. Hollywood’s been trying to use 3-D glasses in theaters in an effort to make an experience not available at home, and I expected TV makers would probably be playing catch-up. And I was right. I saw LG, Samsung, Sony, Nvidia, Viewsonic, iZ3D and others pushing 3-D TVs and monitors at the show.

Paul Liao, chief technology officer at Panasonic North America, says he expects to see 29 3-D movies released in 2010 (coincidentally, that’s the same number released at the peak of 3-D back in 1953). So Panasonic is working with movie studios and other consumer electronics companies to create 3-D standards. The idea is to make 3-D good enough to keep audiences reaching for the glasses. Film maker James Cameron, who is working on the sci-fi film Avatar, is one of those hoping to take 3-D past the gimmick stage to something more permanent. 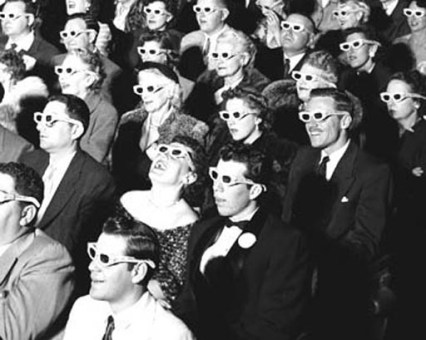 With Hollywood’s talent focused on making 3-D more enthralling than it was 50 years ago, it’s possible movie makers will find new uses for 3-D that will keep the fad from dying out like it did before.

During his CES keynote, Howard Stringer, chief executive of Sony brought Dreamworks animation chief Jeffrey Katzenberg on stage to make a case for 3-D. Katzenberg showed us a scene from Monsters vs. Aliens, an upcoming animated film. On the big screen, the 3-D was pretty impressive. He also gave us an example of what 3-D could do for TV: In a football game, a camera could follow the view of a running back looking for holes. Viewers would be able to see the same openings in the defense that the running back does. Stringer described Katzenberg as “John the Baptist of 3-D.” And Katzenberg really did turn on the hype machine, saying that the move to 3-D would be as big as the move from black-and-white to color. Yeesh. Why can’t they just be honest and say, “Please save movie theaters from flat-panel TVs”? (Scene from upcoming Pixar movie below). 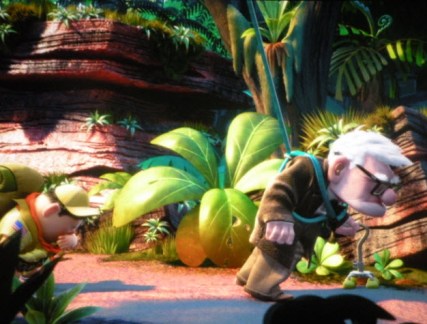 At Nvidia’s booth, I saw how you can adjust the depth of the 3-D so that it doesn’t strain your eyes. This way, users can adapt 3-D to their own tastes more easily than in the past. Nvidia works on Viewsonic or Samsung LCD monitors (with 120 Hertz support, meaning the images flash on screen 120 times a second). It splits that signal and shoots 60 frames per second to each eye to create a stereoscopic effect. It also works with Mitsubishi rear-projection DLP TVs and the DepthQ HD 3D Projector by Lightspeed Design. The Nvidia 3D Vision requires a compatible Nvidia graphics card and a pair of $199 active glasses. An infrared emitter in a small box attached to the top of the TV or monitor sends the 3-D data to the glasses.

It’s all very elaborate, and the Nvidia solution is available now. But I’m still skeptical. The glasses are still inconvenient to wear, especially if you’re putting them over your own. There’s a wide range in the quality of 3-D movies and 3-D hardware. A lot of people don’t have balanced vision between their eyes; usually, one eye is stronger. That means everyone sees 3-D images differently, but the glasses are not that customizable, even with the Nvidia solution. As promising as it all seems, it’s just as likely that a lot of vendors are pouring money into a black hole here.

Nvidia was also showing off a 3-D version of the video game Guitar Hero in its booth (photo at top). It looked good, but it didn’t play any better than the game without glasses. The fun of that game, where you play faux instruments and try to keep the beat of a song on the TV, is fundamentally social. The only way for a party of people to enjoy the game is for everyone to wear 3-D glasses. At $199 each, that just doesn’t fly.

If you use the cheap glasses from the theater on your specially made flat panel at home, the 3-D experience either isn’t as good or simply won’t work. The 3-D sales pitch reminds me of those people who say you should watch a bad movie to the end because it will get better. For more than 50 years, this has been a bad movie, and I’m not convinced it’s going to get better now.