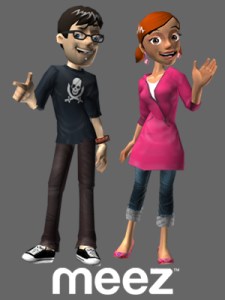 Meez, which lets users create cute characters to represent themselves in online chats, has agreed to merge with Pulse Entertainment, a maker of virtual characters for mobile phones and web sites. The value of the deal was not disclosed.

San Francisco-based Meez lets you create your own 3-D avatar and decorate a room in a cartoon style. It targets teens. This deal will let the company seamlessly extend its avatars to mobile environments.

Pulse Entertainment was born in the dotcom days and tried a variety of business models, including using its 3-D technology for brand web sites and games with in-game advertising. It finally found a model in creating 3-D characters that could be used as avatars for chatting with friends.

Today, Meez announced that it’s raised a new round of funding from Anthem Venture Partners in Los Angeles. The amount was not disclosed.

Meez says it has eight million users. It makes money through messaging services and virtual item sales and sponsorships. Pulse chief executive Paul Anderson will become president of Meez, which is headed by CEO John Cahill. While Pulse clearly couldn’t make it on its own here, it will be interesting to see if the merged companies will offer a more diverse set of services to users and survive the recession.

Meez competes with a variety of rivals, including Gaia Online, Wee World, Habbo and IMVU.