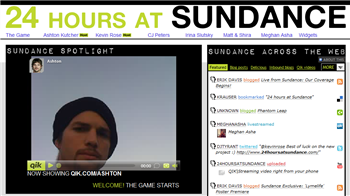 I need your help.

Actor Ashton Kutcher has invited me down to the Sundance Film Festival this weekend in Park City, Utah to partake in an experimental show he’s doing there.

It’s called “24 Hours @ Sundance,” is co-hosted by Kutcher, and will feature myself and three competitors running around the festival with Nokia phones taking live video as we complete various tasks in a reality-survivor setting. Tasks, we’re told, like using a sock puppet to order a meal and asking a stranger to help make a long-distance call to Austria (We have no idea what the tasks will be, but the ordeal will last 24 hours; we’re allowed no sleep).

What’s it all for? For several years music and film producers have wrestled with tech upstarts like Napster and giants like Apple over prickly things like copyright.

But content producers — Ashton Kutcher, for example — are finally realizing the rules have changed for good, that copyright is simply harder to protect in the age of the Web, and that rather than fight it, it’s time to dive in and experiment with new forms of technology and use it to enliven their craft.

And, for better or worse, I’m part of the experiment.

Here’s where technology can change up how people interact with media (and why I agreed to do this, even though they’re warning me I could make a fool of myself in front of thousands): First, the video is streamed live to the Web (you’ll be able to see my video at http://www.qik.com/mattandshira), and so thousands of viewers can follow along. Second, we’re going to use social media techniques to communicate with friends — to get tips from our own followers about how to complete the tasks. We’ll use Twitter (my Twitter stream is here), and we can read responses on our phones.

If blogging shook up mainstream media, you could say live video may do that to the movie industry: It’s a “more visceral, more live experience,” Kutcher tells CNET. It’s this sort of change in digital media that I’d like VentureBeat to cover more going forward; in fact, you may have noticed we’ve already started boosting our coverage in this area.

The show is co-hosted by Kevin Rose, founder of Digg, the tech geek who crosses into the world of entertainment with his other company, video company Revision3. Qik, the live video streaming company is the other co-sponsor of the event with Kutcher’s Katalyst Media.

Below, VentureBeat contributor Maya Baratz uses the Nokia phone (using Qik) to take this introductory video of me and the VentureBeat offices in SF.

My partner in the Sundance competition is Shira Lazar, a TV personality who’s worked at NBC and DirecTV. Her intro video is below. Her Twitter stream is here.

These are the first videos at our live channel (http://www.qik.com/mattandshira), where you’ll be able to follow our escapades. VentureBeat readers can watch the live footage too, via a widget we’ll post on our site. We’ll start Sat. 2:00 a.m. about 9am PST.

I’m counting on you all to join me in this crazy (and potentially humiliating!) quest.

[Full disclosure: Katalyst Media is paying for my flight down to Sundance.]