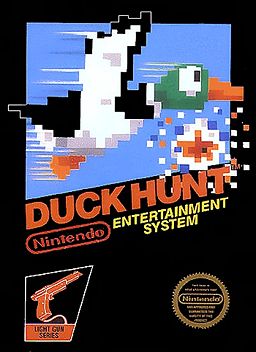 I vividly remember my first video game system, the Nintendo Entertainment System (NES), and the games that came with it: Super Mario Brothers and Duck Hunt. Now I can recapture my youth on my iPhone because some developers have made a port of Duck Hunt for the device.

I’ll brush aside the questionable legality for a second and say that the game is a pretty good port of the original. It’s a bit odd because the developers decided to include a Nintendo 64 (a later Nintendo game console) style joystick controller on the iPhone’s touch screen instead of the regular keypad the NES had. But it makes sense because the joystick moves in all directions while the keypad would only move in four (up, down, left and right). There is also one big red button on the right side of the screen which you use to fire.

Just as with the NES version, you can choose to play the game with either one or two ducks in the air. You cannot shoot clay pigeons as you could in the original game, but the developers note on the App Store page that this is coming soon.

That last one could hurt the game’s chances of staying in the App Store. After all, why would Nintendo want to let some other developer make money off of a game they own, even though it’s unlikely they’ll be developing for the iPhone platform anytime soon, as it’s in a position to compete with Nintendo’s best selling system, the Nintendo DS?

The iPhone version’s developers acknowledge Nintendo in their application notes, and even call their emulator the “iPES” for “iPhone Entertainment System,” but that probably won’t be enough to keep it around. So if you want Duck Hunt for the iPhone, I suggest you hurry up and get it now. The game is $0.99 in the App Store.

Update: Yep, Nintendo shot it down.