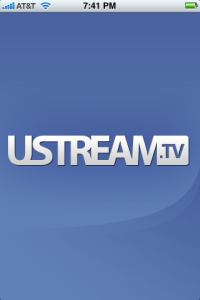 True to its word, live streaming video site Ustream, has released its iPhone application into Apple’s App Store in time for people to watch President Obama’s inauguration on their iPhones live tomorrow.

The app, which I’m using right now, works great. I’m watching the famous Shiba Inu Puppy Cam, and the picture quality is very good. Unfortunately, the streaming video will only work over Wi-Fi and not a 3G connection, a limitation also found in other video streaming apps such as Joost. Even over Wi-Fi, I am experiencing some buffering, but it’s nothing too bad.

You can easily share videos with one click (to email them to friends). You can also search live streams and view upcoming ones. For videos with chatroom functionality, you can also chat from within the app — but you will have to login with a Ustream account to do so.

One thing this app definitely doesn’t let you do is stream video live from your iPhone. There had been some speculation that this would be the first application available in the App Store to let you do that (a version of Qik that has not been released in the App Store has that functionality). Maybe that’s still coming — perhaps that’s why the app is called the Ustream Viewing Application, but as far as I know, Apple is still not permitting apps that record video into the App Store.

The Ustream Viewing Application is a free download. Find it here. 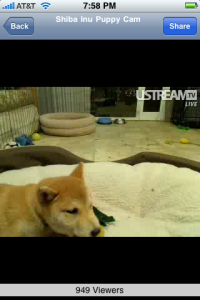 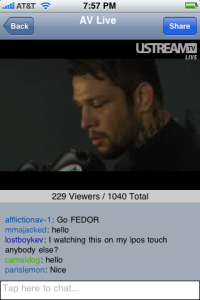