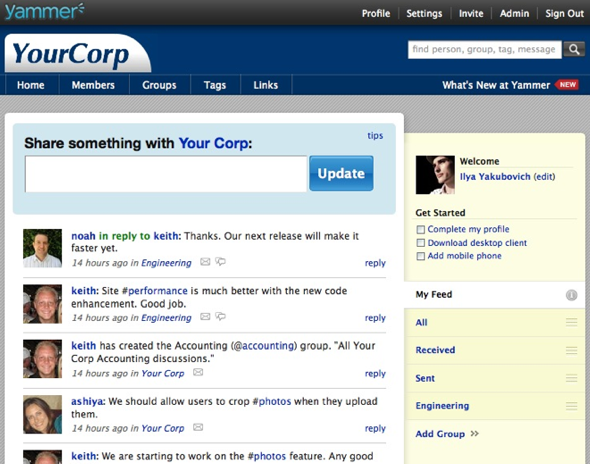 This could be the year that micro-messaging makes it big with businesses, Yammer is betting. The company lets employees share 140-character messages about what they’re working on — a simple intranet to help communicate more quickly than through masses of emails and phone calls. It has raised $5 million from the Founders Fund and Charles River Ventures, founder David Sacks tells TechCrunch.

Certainly, the growth of consumer-facing Twitter this past year — estimated in the millions — suggests that the concept of micro-messaging is going mainstream. But for business? West Hollywood, Calif-based Yammer, through the TC50 win, seems to have branded itself as the go-to “Twitter for business” app. To sign up, somebody in a company creates an account using their work address (johnsmith@acme.com), then invites colleagues at the company who use the the same workplace email domain (billybob@acme.com, susiesue@acme.com). Yammer’s idea is to have employees invite each other and so grow virally within a company, similar to what Facebook did on college campuses by having people log in using their student@college.edu email accounts. It also offers an Blackberry app, a way to organize users by workgroup and other features designed specifically for business users.

Eventually, Yammer hopes companies will be so addicted to the service that they’ll pay a $1 per month per user fee for premium services, like special administrative features, security and data ownership. If that starts happening, it could have a business model making money before Twitter itself does.

There are many variations of Twitter also coming out. Certainly, what Yammer has built could be duplicated by Twitter itself — there are already other startups building micro-messaging services for businesses. One is Identi.ca, a small startup that recently raised an angel round. It hopes to let users create their own Twitter-like systems and offers open source software to let them do so. That’s the thing, though. A simple micro-messaging service isn’t hard to create, but it’s hard to operate at scale. And it can be difficult to get the branding and all the little features right and to differentiate oneself from the pack. Yammer appears to be doing so.