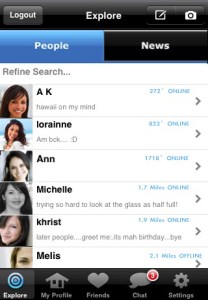 There are some who view any kind of location-based social networking as creepy. But there are others who see it as the key ingredient to move online social networks into the real world. And one type of network in particular could lead the way: Dating sites. At least, that’s what Skout is hoping for with its new iPhone application.

Set to be unveiled this week at the iDate conference in Miami, Skout claims to be the first online dating site with a native iPhone app. That’s not entirely true — there are others like Dating DNA — but Skout could prove more interesting due to its emphasis on location and compatibility with other mobile devices.

If you’ve used any other location-based social networking apps on the iPhone like Loopt or Brightkite, Skout is similar, except that its sole emphasis is on helping you find people to date. After loading the app, you can see others around you who are also running it. If you spot someone who you think you might be compatible with, you can click on their picture to find out more about them, see a stream of their recent activity on the site (like the Facebook News Feed or Wall), look at pictures and comment on posted items, and even chat with them.

A little creepy? Maybe. But if you really think so, this app clearly isn’t for you. There are probably a whole lot of people out there who will appreciate this new melding of the virtual and real worlds for online dating. And who knows, this app may even find its niche among those crazy kids who go out and “hook up” randomly at bars — not that I condone that kind of behavior. It might just be the ultimate ice breaker. 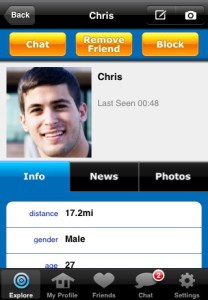 Going back to Loopt, Skout actually reminds me a lot of Loopt’s Mix feature. I always found it intriguing, but at the moment it’s limited in its application for something beyond dating — and that’s not the main purpose of Loopt.

As with all location-based apps for the iPhone, Skout faces one sticky problem: The inability for apps to run in the background. Accordingly, apps must be open to transfer location data and receive updates like chat messages. Everyone is still waiting for Apple’s supposed work-around for this glitch, a solution called Push Notification. But it’s already been delayed by several months, and there is no word of when it will be available.

Still, because Skout works on mobile devices other than the iPhone with its mobile-optimized website, the service has other means to get your location. Right now, it uses services like Yahoo’s Fire Eagle to locate where you are. And of course, you can always manually enter your location and find other users around you.

Skout started off on an interesting foot. It began as a way for users to submit various forms of media, geotag them (with locations) and send them to friends. Then, in 2007, it transformed into a full social network running on the mobile web. At that time, Skout’s co-founder and chief executive Christian Wiklund quickly realized that over 80 percent of its users were using it just for dating, so he decided to take the service in that direction while continuing to focus on the location element.

“Location has becomes a commodity, location is a killer feature,” Wiklund told me when I spoke to him last week. But he added that for it to work with social networks right now, they have to be laser-focused, something that he thinks Skout achieves with its dating network aspirations.

In terms of making money, dating services have it easier than most other online sites because membership fees are usually a given. Skout is currently testing different models, but plans to launch fees that are cheaper than traditional dating sites, something in the ballpark of $2 to $15, Wiklund said. The service is also looking to virtual goods as a way to make money. Buying virtual flowers for a nearby cutie might not be that far off.

And if you receive such a gift, but don’t like the person who sent them, yes, you can block them to avoid a potentially stalkerific situation.

Skout’s iPhone app itself will be free at first to attract users and get them to test it out. Look for it in the App Store sometime this week.