Google is expanding its YouTube eCommerce Program beyond the U.S. and the U.K. to allow viewers in Germany, Spain and the Netherlands to “click-to-buy” products (such as songs or DVDs) related to the videos they watch on YouTube.

This is an effort to boost YouTube’s affiliate ads program, with ads that allow you to buy products through sites like iTunes and Amazon. Links to purchase songs and DVDs will now appear as semi-transparent ads within the videos, instead of just the click-to-purchase buttons that already appear underneath them. 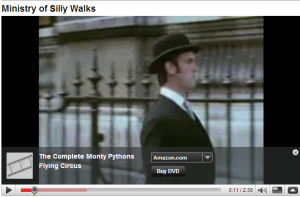 However, the links only work when videos are viewed directly on YouTube and not through embedded videos (though you should still enjoy the classic Spam skit below):

YouTube is hoping that the ads bring more visibility to the product links and translate into more sales, as online ad dollars dwindle and Google experiments to find more ways to make money through YouTube. It’s also a way for video producers to make money through YouTube, since partners can add links to videos of their content that are uploaded by other users. However, it’s unclear how much this will make a difference, this is “small stuff…that won’t move the needle for Google,” as Peter Kafka of Media Memo points out, though the company states that good YouTube content does lead to increased sales, as it did for Monty Python.

Monty Python launched its own YouTube channel last November and the comedy troupe’s DVD sales shot up by 23,000 percent and put them at No. 2 on Amazon’s Movies and TV bestsellers list, claims the YouTube blog. However, as of today, Monty Python offerings don’t even crack the top 100. The list, which is updated hourly, currently contains items guaranteed to not have staying power, such as the straight-to-DVD animated film Tinker Bell and a bunch of hip hop dance workout videos that are sure to get dusty as viewers’ New Year’s resolutions lose steam.