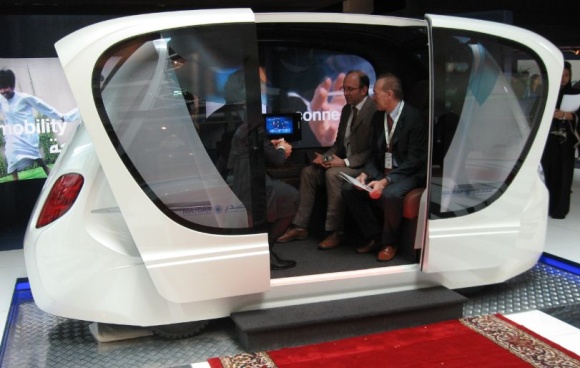 Beneath the tall buildings and alleys of Abu Dhabi’s Masdar City, in a hidden, vault-like space, a unique transportation system may one day whisk passengers back and forth to their destinations, faster than any bus system and more accurately than rail. Instead, it will use small, driverless pods that bear as much resemblance to taxis as public transit.

The scheme is called personal rapid transit (PRT), and it’s an idea that’s been floating around for over 50 years. Despite dozens of attempts worldwide to get PRT running worldwide, there’s not a single true PRT system in operation today. But if you can believe it, the system is actually being built — as is Masdar itself, which is still in its planning stages. The Masdar PRT could finally become a world-changing idea.

In fact, PRT is something of a long-lost brother to other forms of mass transit. What makes PRT different is that its individual vehicles are usually designed for a maximum of four passengers (in Morgantown, W. Va., a PRT-like system has cars designed for 12 people). PRT is often considered a so-called “last mile” solution, useful for getting passengers from a main line like a subway to their doorsteps — and quickly, because its only stops are to pick up and drop off the passenger.

People using PRT would get to and from their destinations more quickly and efficiently, and with none of the familiar hassles of mass transit (screaming babies, unhygenic co-passengers, overcrowding). The problem is that per-ride, it comes out a bit more expensive than buses and trains, at least in theory. And building the first real PRT will be very expensive, because there’s no blueprint.

But in Abu Dhabi, cost isn’t as much of a concern as it might be in, say, Minneapolis. Abu Dhabi controls almost a tenth of the world’s oil and has one of the highest per capita incomes in the world (for its citizens). When it comes to the issue of public transit in the emirate, money takes second place to local concerns over mass-transit systems, many of which are culturally based, including reluctance to pack women and men onto the same mass conveyances. Today, Abu Dhabi runs almost entirely on cars and taxis, but many transit planners consider the Middle East a prime area for PRT’s birth.

And compared with the overall scale, cost and complexity of Masdar, a zero-carbon community planned by Abu Dhabi’s rulers, PRT is a relatively small undertaking. The plan for Masdar specifies an elevated pedestrian-only street level. Below will be an open space, averaging 18 feet in height, mirroring the layout of the streets above. That is where the city’s transit planners, led by a company called Systematica, hopes to place PRT pods.

To use the PRT, the locals would have to go down stairs or an elevator to the under-city level, where they would press a button to call a pod. The average wait time would be about three minutes, according to Luca Guala, an area manager for Systematica; the ride itself would likely take a maximum of about six minutes, since Masdar is only six square kilometers. Total time: less than 10 minutes.

That time could extend slightly at peak usage hours. In general, says Guala, PRT is better at moving people during low usage periods, when the denizens of other cities are used to waiting 30 minutes or more for a bus to come. But with the low carrying capacity of the pods, PRT can become slow when overloaded. “If you want to move huge masses of people, you need a strong system like a metro,” he admits.

Then again, Masdar’s population is only intended to reach 50,000, and the city will also have a light rail line crossing it diagonally. The city will also be constructed such that most people already live close to where they work, so the PRT system won’t get overloaded the way it might in a standard city, where businesses are centralized.

Critics of PRT will argue that its true weaknesses lie in the qualities that have repeatedly proven it to be an unworkable system elsewhere. In many of the particulars, they’re right. Several large American cities, as well as smaller ones, have contemplated PRT (and some, like Ithaca, NY, are still considering it). While the most common reason for abandoning the idea is potential cost and fear over being the first to run an unknown system, there are other negative aspects.

Chief among those is that almost all PRT systems ever planned have involved rail lines, which were necessary to guide the pods. The difficulty of building rail in an existing development, and its outright expense, scuppered quite a few systems. But advances in vehicle guidance and Masdar’s peculiar construction mean that its PRT system will not need rail; the pods will run on regular tires and have their own streets, making it easier for a modern computer system to guide them.

The computer system itself, used for guidance, has also been a concern in the past. The Morgantown system built in the 1970s, while not quite achieving all the hallmarks of PRT, nevertheless required an incredibly complex mainframe system to run its cars. But Guala points out that the days of low computing power are long over, and many components today can be acquired off-the-shelf.

Asked whether a taxi network using electric cars wouldn’t be a better alternative, Guala admits that it might be cheaper. Taxis, he says, are essentially run by supercomputers, in the form of humans — and supercomputers are “very cheap in Abu Dhabi,” in which many of the people are migrant workers from much poorer countries. But over time, the cost of housing and feeding all the taxi drivers would add up to be more, and humans do have their own faults (a taxi ride in Abu Dhabi can be terrifying).

But Guala also thinks PRT has come a long way since it first gained a cult following during the Nixon Administration. Indeed, the company that would build the actual pods and guidance system, called 2getthere, already runs a sort of PRT system in Rotterdam, Netherlands, which is used not for people but for cargo. The real challenge is simply proving that PRT can also be used to move people.

In a world trying to wean itself off the personal car, it would be about time.