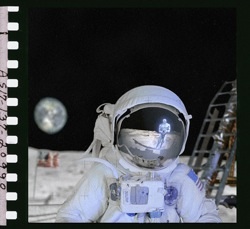 In the last few days, a bunch of my friends have sent me links to the video below — a gloriously cheesy fake news clip recounting the history of Dr. Manhattan, one of the characters in the new movie Watchmen. It turns out the video is just the beginning of a cool effort to promote Watchmen online. That effort is based around a site called The New Frontiersman, but also involves using social networking services like FriendFeed, Twitter, and Flickr to reveal an insane amount of material fleshing out the alternate history of America featured in the film. You can see everything from scanned government documents to photos of a slightly different version of the Apollo moonlanding (look closely at the helmet).

This is probably the first movie campaign that I’m genuinely excited about. It’s a good match of smart distribution (I love the fact that the FriendFeed stream is as central to the campaign as the official site), clever material (no, seriously, have you watched the video yet?), and a film with a rich, science fictional world that lends itself to this kind of campaign.

Dan Light, head of interactive at The Picture Production Company, is one of the folks spearheading the online Watchmen effort for Paramount, which is distributing the film internationally. He says the previous benchmarks for smart, successful movie marketing on the web were The Dark Knight and Cloverfield. But those campaigns centered on a single website, forcing fans to play alternate reality games in the real world or jump through other hoops to access the coolest parts of those sites; the Watchmen campaign is all about pushing a lot of material out there through as many different channels as possible.

“I can’t think of another campaign that makes such economic use of these tools in such a cleanly integrated way,” Light says.

When I spoke to Light yesterday, he told me the Dr. Manhattan video had been viewed 110,000 times in the 24 hours it had been up, while The New Frontiersmen site had seen about 200,000 visitors since it went live a week ago. Even more impressive, Light has counted 1,500 blog posts about the video or the site.

Aside from the social networking biggies, there will be exclusive material unveiled in the Playstation 3 Home virtual world. Notably absent from the list of sites used in the campaign is Facebook. It seems like virtually every major movie has its own Facebook page nowadays, but Light says Facebook is actually a bad place to promote films — Twitter, for example, is much better, because it facilitates new friendships and conversations with people you don’t know. [Update: Looks like I misunderstood what Light was trying to say here. He tells me Facebook isn’t a bad place to market movies per se, but he’s seen plenty of badly managed Facebook campaigns. In contrast, “Our implementation of Twitter and Friendfeed is very lean. We’ve kept it simple, and used the right tools for the right jobs.”]

So will the Watchmen effort be a template for future campaigns, as Light claims? I’m definitely impressed, but I also wonder if there will be many films that lend themselves as perfectly to this approach. The graphic novel by Alan Moore and Dave Gibbons that the film is based on is legendary for the complexity of the world and the density of its storytelling — it describes an alternate 20th century in which superheroes have been around since the 1930s, shaping world history, and it is itself full of “extras” such as book chapters, toy catalogs, and an issue of right-wing magazine The New Frontiersman. It’s hard to imagine, say, Bride Wars providing as much opportunity for additional material, or even Star Trek, which will be The Picture Production Company’s next major effort.

An interesting footnote: Technically, Light’s company is only handling the online international campaign, not the U.S. campaign from Warner Bros. That hasn’t stopped it from getting plenty of attention from U.S. film sites like Ain’t It Cool News. Looks like these marketing campaigns — as well as geeky fanbases — are international, whether the studios plan it that way or not.

Update: Wow, I just found out that Light did his dissertation at the Edinburgh University on “Ideas of Freedom in the Graphic Novel,” focusing on Watchmen, The Dark Knight Returns, Arkham Asylum, and the Books of Magic. Dan Light is officially my hero.