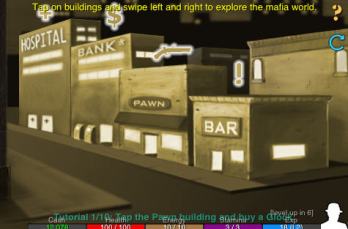 Social games have taken off on networks like Facebook, and now mobile platforms like the iPhone. One of the newest examples is the iMafia game from PlayMesh, which has found a clever way to integrate virtual goods — a challenge for most iPhone apps.

Social games like Mob Wars are already hugely popular online. But Charles Ju, co-founder of PlayMesh in San Francisco, believes the time is right to migrate the concept to the iPhone, which is capable of supporting the same features that draw audiences on the web. The result, iMafia, was released on Friday and already ranks No. 88 in the Apple AppStore. 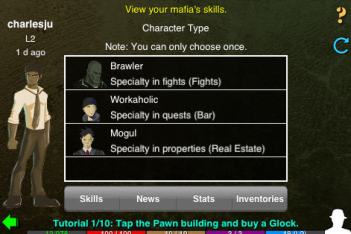 The object of the free game is to climb the ranks of a crime family by pulling small jobs and shaking down the neighborhood. You can compete with other players (even if you aren’t playing at the same time), and buy virtual goods that will help you along the way. The graphics are pretty basic, with two-dimensional artwork and text-based instructions giving users a variety of options.

On the game’s homescreen, you see a neighborhood, and can use your finger to navigate through the map. You tap on the iPhone’s screen to enter a building. For instance, you can stop into a bar and buy something or get in a fight (and if you fight someone, you’re fighting against another real player). The idea is to succeed at quests to gain experience and earn promotions.

Ju says the game is groundbreaking because it successfully relies on virtual goods to monetize a social network in the context of a free game. 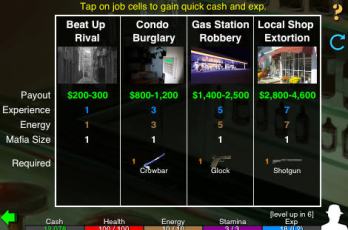 This is even more important considering that Apple hasn’t allowed straight virtual goods models on the iPhone to date. If it did, game developers would simply give apps away for free and let users purchase premium versions through services like PayPal. After all, Apple takes 30 percent of revenue from game sales while PayPal only takes 5 percent. More free games would invalidate Apple’s current business model.

But PlayMesh has come up with a way to work around the virtual goods moratorium. The company has several other hit games — Chess Puzzles, iType and Speed Shapes — and uses them as “payments” for virtual goods in iMafia. If you buy Chess Puzzles, for instance, you earn premium points to increase your health, buy cool guns or even recruit more mafia members inside the game. PlayMesh can add premium games like this to its portfolio indefinitely, and users end up with a fun game in addition to premium points. Important to note: These games aren’t currently available in the AppStore. Their free versions have been removed, to be replaced by the paid versions still awaiting Apple’s approval, Ju says.

There is a twist, however. One problem with the iPhone is that users have a tough time discovering apps of interest that are not in the top 100 — which would make it difficult for them to stumble upon these smaller games. PlayMesh hopes to alleviate this problem by offering its virtual goods system to all game developers. It will then use the power of the market to give tailored recommendations based on the games that have the highest buy-in  rates.

If you are playing an iPhone music game (like Tap Tap Revenge) and finish it, you may want to unlock more songs so you can keep playing the game. If Tap Tap Revenge was integrated with the PlayMesh system, it would instruct users to download a shooting game, a calendar or another app to unlock new songs. If most users choose a particular app, PlayMesh can push that title near the top and allow players to find it more easily. That way, the PlayMesh platform becomes a recommendation engine, creating additional value for those who use it. And Tap Tap Revenge’s developers would get a share of the money for each app download it triggers.

The iMafia game itself is pretty simple. You can share it and communicate with friends via Reddit, Facebook, email, Twitter and text message. Ju calls it a massively multi-player online role-playing game, since you’re essentially playing in a virtual world against other players.

PlayMesh (the parent company of IggyGames) has two full-timers and two part-timers. Features coming at a later date include leader boards, challenges, newsfeeds and sharing mechanisms.

Here’s a link to the game on iTunes. And here is a video explaining how it works. (And please check out the link to our upcoming GameBeat 09 game conference coming up March 24.)
http://vimeo.com/moogaloop.swf?clip_id=2913153&server=vimeo.com&show_title=1&show_byline=1&show_portrait=0&color=&fullscreen=1
iMafia from PlayMesh on Vimeo.