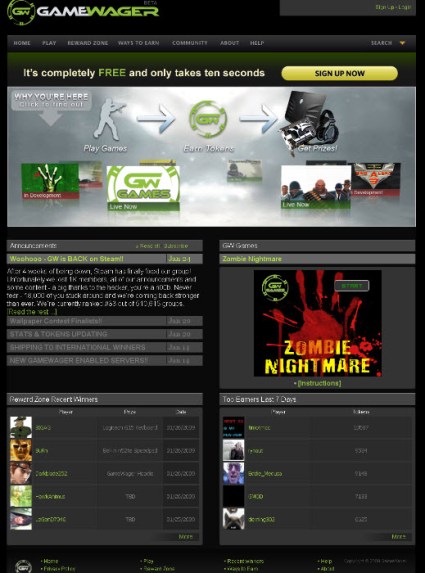 GameWager is an online games site where you can play against others for a chance to win prizes. And one game icon who’s betting on it is Nolan Bushnell, the father of video games, who’s an executive advisor to the Austin, Texas-based company.

It’s not a strict gambling site like the old Ultimate Arena game, which faced regulatory hurdles. Rather, you can log into the site and play your own multiplayer PC combat games such as CounterStirke version 1.6, CounterStrike Source, Team Fortress 2, or Zombie Nightmare.

Company cofounder Thomas Marriott says he and his friend George Giannukos got the idea by accident. They were arguing about which direction they should take with a startup and agreed to settle it over a game of CounterStrike. They abandoned the orignal idea and started GameWager in February, 2007.

They launched a beta version in July 2008 and now have 60,000 players who have earned over 25 million tokens. The tokens are the reward for winning a game, either on your own or as part of a team. The company streams the game data through its servers and keeps track of who has won what. So far, the service is free. Bushnell, who serves as chief executive of social games firm Uwink, has been involved for a little over a year.

Playing games for prizes or money has been around for more than a decade. Marriott said he looked at cash wagering but found it too mired in gambling regulations or deal with problems cheating. So instead, the company gives away tokens as rewards. Those tokens can be used to get a chance in prize drawings. And the company has a system in place where it can catch cheaters after the fact and stop them from redeeming any tokens. 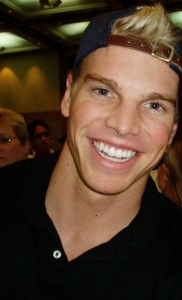 Token winners can participate in drawings on a daily, weekly, monthly or quarterly basis. The more tokens you wager, the better your chances of winning. You can see your chances of winning because the site discloses who has wagered the most tokens. Prizes are donated by nine sponsor companies, including Alienware, which has given away gamer laptops.

The company raised an undisclosed amount of money in August, 2007 from angel investor Todd Wagner. It’s in the midst of raising a series A (first institutional round) now. Marriott says he’s targeting about $3 million. Marriott said the company is not yet making money and will disclose its business model later. He expects the primary sources of revenue will be subscriptions, affiliate referrals, and advertising. The company will introduce its monetization plans in the first half of this year.

Marriott said the company considers itself a gamer’s social network and will thus compete with players such as Raptr and Electronic Arts’ Rupture division. Marriott says the company will add more games over time. (And please check out the link to our upcoming GameBeat 09 game conference coming up March 24.)