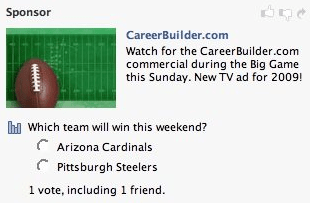 Facebook is testing a new form of advertising: Polls. Advertisers can run a poll on a member’s home page, and when a user answers a poll question — like “which team will win [the Super Bowl] this weekend” — they can see how this member’s Facebook friends and other people have voted.

The poll ads will begin running for CareerBuilder.com as part of a larger online and offline Super Bowl advertising campaign. Facebook says it has also lined up polling ad campaigns from AT&T and the World Economic Forum.

Facebook quietly pulled an earlier version of the polling feature at some point late last year. That service had allowed users to create their own polls for as little as a few dollars. The social network says it will offer the new polling service to its other “direct sales clients” after it has completed testing.

A number of third-party polling applications are also available — but they don’t get the same prominence on Facebook’s homepage. Even so, one called “Poll,” created by Kremsa Design has a quarter of a million monthly active users and a long list of notable advertising clients.

Advertiser polls are the latest move by Facebook to offer what it calls “engagement” advertising. Other examples of engagement advertising methods include features that let users become “fans” of advertisers’ Facebook pages, ways to comment on ads that appear in news feeds, sponsorships of virtual gifts, and ways to RSVP for an advertiser’s event. 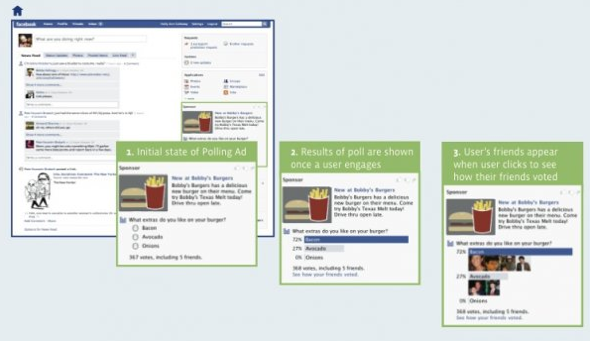