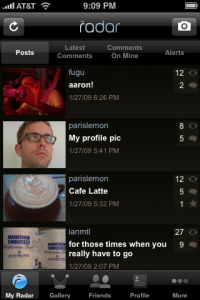 Let’s be honest, there’s a lot of websites and applications right now that let you share things with other people. Twitter does it, FriendFeed does it and Facebook does it, among many others. But while those are increasingly about sharing with as many people as possible, Radar has a sort of “less is more” approach. By sharing things with just people that are actually your friends or acquaintances, the items are more prone to elicit a response. And Radar’s new iPhone application extends that idea.

While on a service like Twitter you share text and other items by way of links, and on FriendFeed you share just about anything the web has to offer, Radar keeps it simple: You can share either photos or videos. Once you share one of those, it appears on your friends’ screens where they can easily comment on it. These comments all appear next to the item which they are about so as to maintain context.

And that’s important because the majority of Radar’s audience is accessing the service through a mobile device — around 85 percent, Radar founder and chief executive John Poisson tells me. The mobile version of Radar, which currently works on the mobile web as well as on apps for Windows Mobile, BlackBerry and others is set up well to share items and show the conversations around them. The iPhone app is set up even better.

Using the device’s touchscreen, you can easily scroll through your friend’s items. With one click, you load one and can see all its comments. And with another click you can comment yourself. You can also double click on a picture and use the iPhone’s multi-touch capabilities to zoom-in or rotate the image for further investigation it. The multi-touch rotation is particularly nice because it’s not just in 90 degree increments, you can use two fingers to rotate it as much or as little as you with and it will hold (see the video).

If you’re looking for more than just what your friends are sharing, you can also browse areas in the “Gallery” which includes content from sites like CollegeHumor and Vimeo. To post a new photo, you simply click on the camera icon common among many iPhone apps and choose from a new photo or an existing one. Because the iPhone does not currently support taking videos, you cannot upload a video from the iPhone, but you can watch them on there. 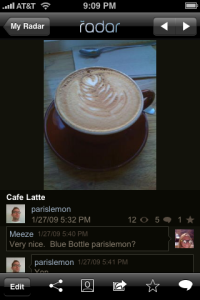 If you like, you also have the option to post items to the public Radar audience (and yes, you can even send out your updates to Twitter) — but, as I’ve said, that isn’t the point. The point is to share these pictures or videos with your friends. And it’s easy to share items with just certain friends using either groups or manually clicking on specific contacts.

Poisson talks about “Twitter fatigue” and wonders if everyday Internet users will ever get used to a service like that in the way that many of us in the tech sphere use it and the other social networks. And it’s those everyday users that Radar is targeting, the ones who might use Flickr or Facebook, but still haven’t heard about Twitter; those who can understand the point in sharing images and videos, but not random text.

It makes sense on a lot of levels, but one area of concern has to be the aforementioned Facebook. After all, isn’t that an already well-established social network for sharing pictures and videos with people who are (at least supposed to be) your friends? Poisson acknowledges that Facebook does certain things well, but again thinks that for the process of just sharing images or videos, it’s far too robust, and thus complicated, a platform. Plus, as he notes, their emphasis isn’t really on the mobile front. At least, not yet.

In terms of monetization, Radar uses AdMob to display ads at the bottom of its iPhone app, but has a much more interesting model in tying promotions into the service. For example, Radar recently ran a promo with Paramount Pictures for the movie Tropic Thunder. Some of this content can be integrated into the regular Radar experience and users can interact with it. While some people may not like this intrusion, it’s hard to think that ideas like this, also being used on again Facebook and other networks, isn’t going to play a big role in the future of advertising online.

Radar is a part of Tiny Pictures, a company which raised a $7.2 million second round of funding nearly a year ago from Draper Fisher Jurvetson and previous investor Mohr Davidow Ventures. Before that, the company had raised $4 million in a first round, and received angel money from the likes of Reid Hoffman and Joi Ito among others.

Radar’s iPhone app is free in the App Store. Find it here.