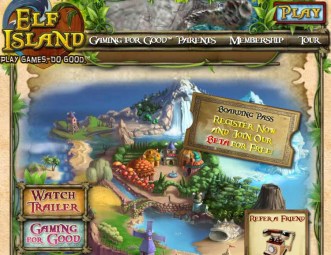 Elf Island is one of more than 200 virtual worlds for kids. But it has a unique marketing twist that may help it stand out. It enlists the kids who play to make a difference in the real world by raising awareness about social causes.

Today, the company challenged its “tween” audience to protect endangered sharks in the Galapagos Islands. The Atlanta-based company, Good Egg Studio, hopes to bring attention to the real world problem of poachers illegally killing sharks to the point of extinction.  In the virtual world, kids can undertake a GoodQuest. If they do enough of one activity inside the world, Elf Island will work to benefit WildAid, a nonprofit aimed at stopping the killing of sharks in the Galapagos.

Players navigate the underwater world to help search patrol zones for poachers. Working their way through a maze under time limits, Elf Island users can collect coins and free captured sharks for extra points. They also tag the poacher boats they find with GPS navigation tags. Just as in the real world, park wardens then track down illegal fishing boats.

The more kids play, the more Good Egg Studio will donate to repair real-world park warden boats. The company has already made a donation to repair one boat in the real world. 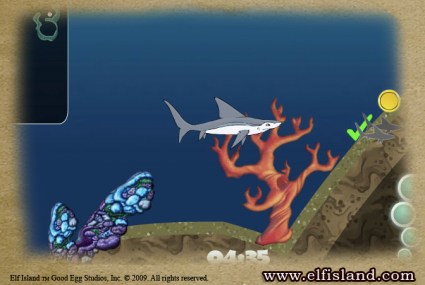 The virtual world is a new take on the idea of a “mirror world” or “mirrored gaming,” where there is a connection between the virtual world and the real world. The company has also helped plant trees in Niger through Plant-It 2020 and helped protect polar bear habitats in the Arctic with Polar Bears International. Habitat for Humanity is also a partner.

Elf Island was founded in June 2007 by husband-and-wife team Liz and Craig Kronenberger, co-founders of Good Egg Studio. The game is free for a basic membership for kids, who can create their own avatars. Paid subscribers can be more active in the GoodQuests, chat with others and engage in various games inside the world.

The company has 16 employees.  The company raised $2 million in a first round from Atlanta Technology Angels and others. The company has also received $415,000 from tax credits granted through a program with the Georgia Department of Economic Development.