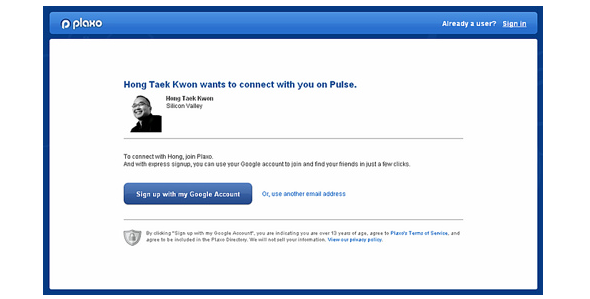 In an effort to make data-sharing easier to use, Google and social contact service Plaxo are showing off a simplified new way to sign in and synchronize accounts between them using only “two clicks.” The promise is that the average web user will eventually be able to easily take their user identities and their data anywhere online.

In the example provided by the companies, they explain a process whereby a Plaxo user sends an email invite a friend who uses Gmail. Google can see that the Plaxo invite has been sent to a Gmail address. This means that if the friend decides to join Plaxo by clicking the email’s invite link, Plaxo knows who the Gmail user is, and that user can create a new Plaxo profile using their Google profile. They can also choose to import their Gmail address and Gmail contacts into Plaxo.

The companies have created this interface using a combination of open-standard technologies, including OpenID for signing into Plaxo using your Google account, OAuth for giving Plaxo authorization to some Google data, and the Google Contact application programming interface to specifically extract contacts’ emails.

Up until this point, various efforts — like Google Friend Connect — have required users to go through more complicated steps for sharing identities and data across sites, as I’ve noted unhappily. Friend Connect is going up against Facebook Connect, though, and Facebook Connect requires no sign-on if you’re joining a Connect-ed site and you’re already signed into Facebook. That ease-of-use was powerfully demonstrated by Facebook and CNN during last week’s presidential inauguration ceremony for Barack Obama. You simply opened CNN’s live video feed of the inauguration on CNN’s site and you could immediately start messaging back and forth with your Facebook friends while watching the ceremony. Multi-site sign on, like what the companies are announcing today, will be more compelling when it can bring integration down to one or zero clicks, but this is certainly a step in the right direction.