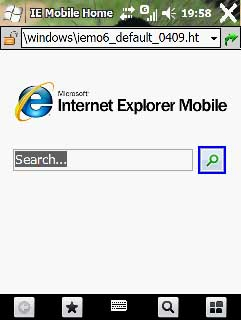 Word keeps circulating that Microsoft is poised to unveil its latest mobile operating system, WIndows Mobile 6.5, at the Mobile World Conference to be held in a few weeks in Spain. There are plenty of screenshots already out there, but the latest show the OS’s version of its web browser, Internet Explorer (IE). Quite frankly, it looks awful.

The other screenshots featuring the “honeycomb” look for Windows Mobile 6.5 have looked okay — not great, but better than previous versions. But I’ve seen this version of IE before on my Dell PDA from 2001, which also ran Windows Mobile.

Okay, to be fair, there appear to be some new features that should prove useful for current Windows Mobile users. Gizmodo seems to like the “finger friendly navigation bar” — which is advantageous, like it is on the other mobile browsers that have had it for a while — but again, here it just looks terrible. The bad pixelation of elements may or may not be a function of poor screen captures, but the overall look makes you wonder if Microsoft doesn’t realize that “retro” is not a cool look for technology?

If someone is in the market for a new phone, why on Earth would you get one running something that looks like this over say, the iPhone, any Android phone, any BlackBerry phone or (when it comes out) the Palm Pre?

Point is, you won’t. And Microsoft will continue to lose market share to all of the aforementioned platforms. The company hoped to launch a more substantially revamped OS, Windows Mobile 7 this year, but it appears that it has been delayed indefinitely. That is not good news for Microsoft.

The company had better hope that its upcoming application store, supposedly called “SkyMarket,” is full of compelling applications that people actually want. Otherwise, 2009 could be a bloodbath for Windows Mobile in the mobile space.