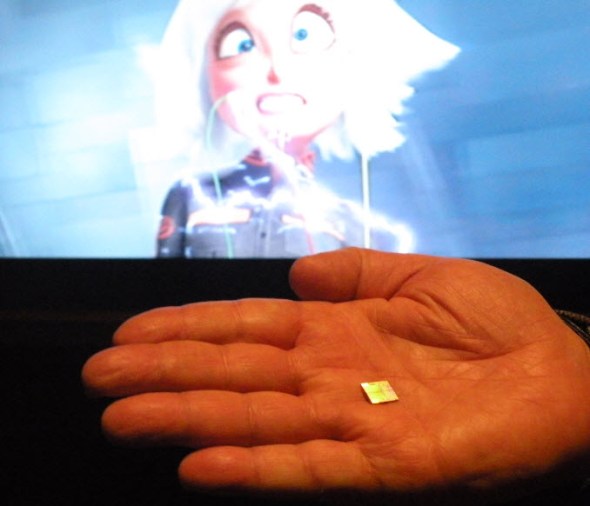 Perhaps the craziest marketing stunt planned for this year’s Super Bowl will be an unlikely joint promotion of the film “Monsters vs. Aliens” using 3-D glasses.

By their own admission, Intel, DreamWorks Animation and NBC are spending a bazillion dollars on this one. They want you to watch the trailer of the film in three dimensions, using 3-D glasses that are allegedly far better than what our grandparents had in the 1950s when the 3-D fad started.

Intel has made 130 million 3-D glasses that it will give away in 28,000 retail locations from — Best Buy to grocery stores — leading up to the Super Bowl on Sunday. To make that many glasses in less than four months, the manufacturer American Paper Optics in Tennessee had to make more than 72,000 3-D glasses per hour. That turned out to be 30 trucks full of 3-D glasses.

The Intel folks showed off their glasses in San Francisco at a reception Thursday where they also had a prototype of an Intel microprocessor, dubbed Penryn. They promoted their Larrabee graphics chip, which is coming out soon as Intel’s answer to rivals Advanced Micro Devices and Nvidia. Amid chicken wings and entertainment that included a live rock band of three talented Intel PR folks and the Wall Street Journal’s Don Clark, they showed off the technology and gave out their own sets of 3-D glasses.

Anyone with a pair of the glasses will be able to watch the Monsters vs. Aliens trailer on their own TVs in full 3-D at home. They will also come in handy for watching a 3-D commercial for Pepsi’s SoBE LifeWater energy drinks. The glasses create the illusion of depth to an image by showing a slightly different image to each eye. Older glasses caused headaches. But the quality is supposed to be better now with this InTru3D technology, according to Jeffrey Katzenberg, chief executive of DreamWorks. He says images won’t be as blurry anymore either.

Needless to say, as I’ve said before, this excitement about 3-D glasses is nuts. But the guy who owns American Paper Optics is already laughing all the way to the bank.

This faith in 3-D is proof that Howard Stringer, chief executive of Sony, was right about what he said during his keynote speech at the International Consumer Electronics Show: Katzenberg is the John the Baptist of 3-D. Intel got involved because Katzenberg agreed to promote its upcoming Larrabee chip, which has been much maligned by Nvidia CEO Jen-Hsun Huang for its tardiness. In return, Intel is providing all the hardware for Katzenberg’s compute farm to render DreamWorks animated films.

This is further sign that the technology industry has gone stark raving mad when it comes to heralding 3-D glasses as the next big thing. The movie will hit theaters in March, and I think it will look good on the big screen. But in the home, 3-D is a novelty that will wear off quickly.