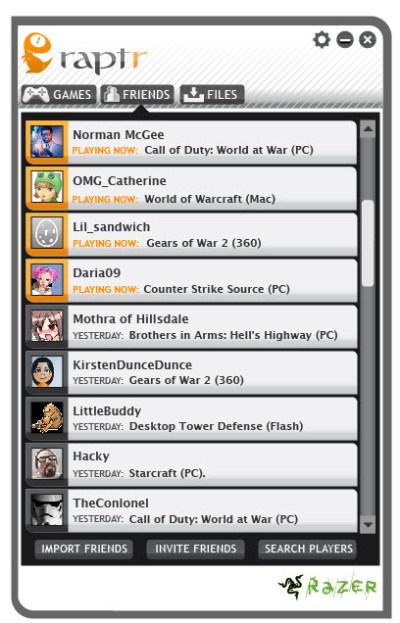 Raptr and Razer have struck an interesting co-marketing deal. Razer makes high-precision computer mice for gamers, while Raptr has started a social network for gamers.

At first blush, it’s a little weird that you will get a social network with your mouse. But it’s a clever bundle. In the past, Razer distributed its mice with disks that contained the drivers, or control software, for the mouse. Now the mice plug into a universal serial bus port on a computer and automatically trigger the downloading of the driver software via the Internet.

When that happens, the Raptr client for the gamer social network will download at the same time. Hence, Raptr gets access to millions of Carlsbad, Calif.-based Razer customers, while Razer can use Raptr to directly communicate with its fans and learn their gaming habits via the analytics built into Raptr.

Raptr and Razer plan to hold contests to let Raptr users have a chance to win Razer gear. Raptr will be bunded with the Razer DeathAdder mouse, the Razer Lachesis mouse, and the Razer Lycosa keyboard, with more products to be added over the coming months.

Mountain View, Calif.-based Raptr, which offers a free service that helps gamers connect with friends and discover new games, is run by former pro gamer Dennis Fong, who founded it in 2007. The company’s client is distributed via game companies such as Activision Blizzard, which included Raptr in Call of Duty World at War. You can expect to see more of those deals to come. Raptr has raised $12 million plus in funding from investors including Accel Partners and The Founders Fund.