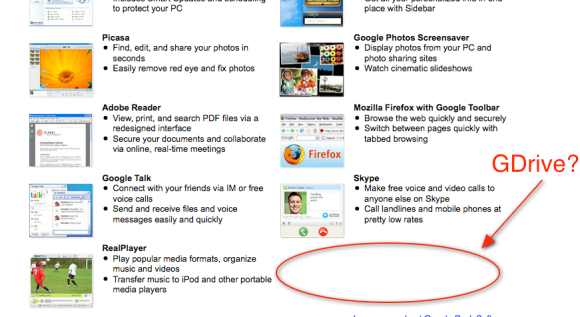 Almost every day reveals a new hint into what Google is planning for its “GDrive” online storage service. Today, a piece of code found in the Google Pack software bundle includes both a product category and description for GDrive.

The code, found by blogger Brian Ussery and further detailed by Google Operating System, clearly states that GDrive is an “Online file backup and storage” utility. But the two descriptions are even more interesting.

GDrive provides reliable storage for all of your files, including photos, music and documents.

GDrive allows you to access your files from anywhere, anytime and from any device — be it from your desktop, web browser or cellular phone.

Photos and documents both make sense, since Google already uses online photo storage via its Picasa Web Albums service, and online document storage via Google Docs. But music is something Google hasn’t touched before with its storage options. Could GDrive be the online solution to back up your digital music collection — or perhaps even play it from anywhere?

I mention that because the second description says that you’ll be able to access your files from anywhere and from any device. Imagine being able to play all of your music on your laptop or phone even if your computer with your main music library is at home. Other services offer this functionality, but Google doing it could really take it mainstream.

You’ll notice that the second description also talks about desktop access separately from web browser access. Presumably this means that Google will have some sort of desktop client for GDrive, which makes sense if it wants users to be able to do auto-backups of important documents.

Given that the other services described in the code are all included in the Google Pack, it seems pretty likely that the GDrive desktop software will also be a part of Google Pack when it’s ready to go.

So there you go, some new details about GDrive. The most important question remains unanswered however: When — as in, when will it be launched? All these code hints would seem to indicate sooner rather than later, but Google appears to have trouble settling on a name — GDrive has been tossed around a few times, but so has “Google Web Drive” and others.