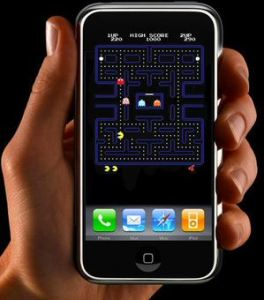 The iPhone is gaining momentum as a game platform, as we noted back in November. Owners of iPhones accounted for 14 percent of all mobile game downloads in November, according to market researcher comScore.

About 32.4 percent of all iPhone users reported that they downloaded a game in November. The market average is just 3.8 percent. The BlackBerry Curve also scored high with game downloads as smart phones in general are replacing low-end phones such as Motorola Razrs and low-end flip phones. Smartphones now account for six out of ten of the top mobile devices used for downloads, said Mark Donovan, an analyst at comScore.

About 8.5 million people in the U.S. downloaded games onto cell phones in November. That number is up 17 percent from a year earlier. Donovan said that mobile games are now reaching a broader demographic, with the strongest growth among teens as well as those 35 and older.

Apple noted that iPhone games dominated the list of those nominated for best mobile games from indie developers in the Independent Games Festival Mobile awards.