Google has just launched a new aspect of its Google Maps product called Latitude. It’s a social layer that goes over Google Maps to show your location information in real time. If you think Google is already creepy with the amount of data they have about you, you’re going to hate this.

But as I see it, this is Google getting ahead in the social networking game, rather than playing catch-up, as it has had to do in the past. While location-based social networking is far from common, it is a potentially exciting new aspect that could change both our online and real world lives. Just imagine being able to look at a Google Map on a wide range of mobile devices, or on your computer and seeing where your friends and loved ones are. If they’re close by, maybe you can make plans with them. 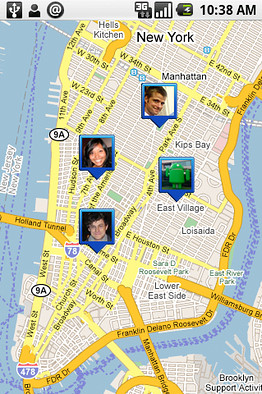 It’s a scenario AllThingsD’s Katherine Boehret played out for a week as she got an early look at the new feature. While she had some issues with the service’s reliability (it uses a combination of GPS or Wi-Fi to gather your location information depending on what kind of device you are using and what information is available), she seemed to recognize how knowing someone’s location could be useful in certain circumstances.

And it’s a slippery slope for sure. Privacy is obviously a main concern with a feature like this, but Google, like the other location-based networks, offers Latitude as an opt-in service and easily allows you to tweak your location sharing preferences. For example, you can share your exactly location with some friends, but more vague (or no) data with others.

So far, I’ve only used Latitude on the desktop, which, while interesting, seems a lot less useful than it could be on a mobile device (it’s not yet available on my G1). I have used several of the location-based networks for the iPhone such as Loopt and Whrrl. While these are still gaining their footing and figuring out the best way to build and maintain a location-based network, the fact that Google is now in the picture has to be both scary and gratifying on some level. Scary because if Google can nail this feature and integrate it with something like Gmail, it could wipe them out. But gratifying because it validates what they are doing. 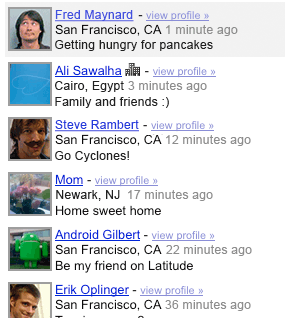 Boehret notes that Latitude does tie in with Google Talk, Google’s instant messaging platform. Apparently, you can send a status update (hello, Twitter and Facebook!) and have it set in Google Talk. Same with a profile picture, apparently it all ties in with Google Talk. That’s somewhat interesting, it seems as if this is Google biggest attempt yet to unify its various properties into a proper social network of sorts.

But are those properties too spread out and different to tie together? For example, I’m not sure how I feel about using Google Maps as a social tool. It seems a bit of a gamble for Google to take, but if it pays off, it could pay off big. And you just know that the major social networks like Facebook and MySpace have location capabilities just around the corner.

Latitude should be live shortly here on the web, and it will also be rolling out on a variety of devices including the G1, some BlackBerrys and some Windows Mobile devices that use Google Maps shortly. Implementation with the iPhone and Sony Ericsson phones is planned for later.