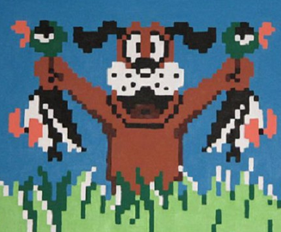 A few weeks ago, I tried out an application for the iPhone based on the classic Nintendo game Duck Hunt. My initial reaction was to wonder how long until Nintendo had it pulled down from the App Store? Now I have my answer: a few weeks.

Nintendo requested that Lawl Mart, the app’s developer, remove it from the App Store and it complied, according to Macworld. Nintendo’s reasoning was obviously that the game infringed on its copyright. What’s interesting is that there are several other knock-offs that are not quite the same as Nintendo’s Duck Hunt but are clearly inspired by it, as The LA Times notes. Those apps have been allowed to stay alive in the App Store.

It’s too bad. Duck Hunt for the iPhone was pretty fun, especially since the developer updated it after my initial review to include the chuckling dog. But the real reason it was fun was because it reminded me of my childhood playing the original Duck Hunt on the Nintendo Entertainment System (NES).

While Nintendo obviously has the rights to kill such an app, I wish it was doing so because it was  working on its own version for Apple’s platform, but you can be sure that’s not the case. With the iPhone (and iPod touch) becoming a viable gaming platform that can legitimately compete with the likes of systems like the Nintendo DS, you can be sure that Nintendo is not going to do Apple any favors and start releasing its most popular games on the iPhone.

Looks like it’s time to break out that old NES and blow the dust out of my cartridge to get my Duck Hunt fix.