Posterous, the San Francisco startup that wants to simplify blogging, is making it even easier to share cool stuff you find online with its new bookmarklet.

Co-founder Garry Tan describes the bookmarklet as “throwing down the gauntlet” against competing service Tumblr. Posterous needed a bookmarklet — in other words, a tool in your bookmarks bar that lets you send stuff to your Posterous blog — to compete against Tumblr’s, and the team has done a great job of making it ridiculously easy to use. After all, simplicity is Posterous’ big selling point.

For one thing, the Posterous bookmarklet lets you share stuff found on popular sites like YouTube and Flickr with just a few clicks, but that’s something other services handle well, too. The more interesting use case involves sharing things you find on blogs, which often include multiple forms of media. Let’s say, for example, I wanted to share my VentureBeat article about how the marketing campaign for the movie Watchmen uses Twitter, FriendFeed, and Flickr on Electric Ant Zine, the comics-related group blog that I belong to. I just click the “Share on Posterous” button, then Posterous highlights all the “excerpts” (namely, the embedded media) it finds, allowing me to post the YouTube video embedded in the article, or the photo at the beginning of the story. Tan says the bookmarklet automatically handles all the necessary resizing, too. And if I want to include, say, the photo and the first paragraph, I just highlight the relevant portion of the post, and it’s selected for sharing in the bookmarklet. 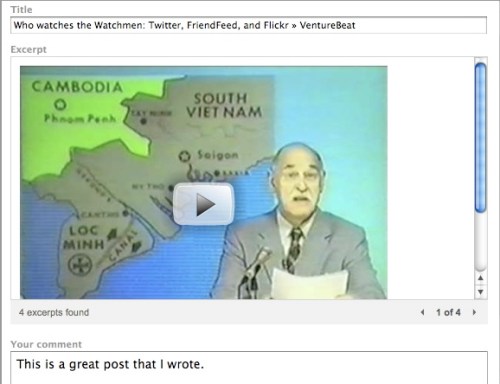 Tan says he’s also exploring ways to include text in the automated excerpts.

Now, I’m not a regular Tumblr user, so you may want to take this with a grain of salt, but this certainly seems a lot smarter than the Tumblr bookmarklet, which doesn’t automatically detect things like embedded YouTube videos and doesn’t make it easy to share both media and text in a single post — the options are divided into just posting a video, a quote, a link, and so on. Also, by combining the Posterous bookmarklet and the Autopost feature (which lets you post to other services like Facebook and Twitter), Posterous presents a real alternative to social sharing service FriendFeed.

My only complaint involves belonging to multiple Posterous blogs (which I do). If you want to select the correct blog to post to, you have to dig into the “advanced options” menu. This seems to be at odds with Posterous’ “dead simple” philosophy.

Posterous was incubated by Y Combinator and announced a $725,000 seed round last December.