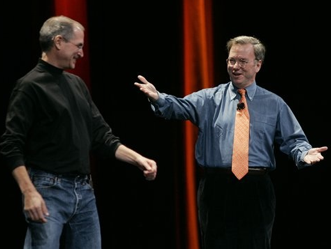 One of the bigger complaints about T-Mobile’s G1, the first phone based on Google’s Android platform, is that its touch screen doesn’t use multi-touch, the technology which allows for a screen to accept multiple points of contact as simultaneous input. Now we may know why.

Apple, which of course makes the signature multi-touch mobile device, the iPhone, apparently asked Google not to implement it, and Google agreed, an Android team member tells us.

Further, the Android team member went on to say that they were relieved that Google didn’t go against Apple’s wishes, given the legal storm that appears to be brewing between Apple and Palm, which is using multi-touch technology in its new Pre phone. Even if Apple ultimately decides not to pursue legal action against Palm (it’s not yet clear how likely that is, but Apple does have an impressive array of patents), the situation has likely soured the relationship between the two companies. Google, it seems, wants no part in ruining its relationship with Apple.

And that makes sense. While the connection between Apple and Palm would seem like it should be strong, given how many former Apple employees now work at Palm, Google and Apple are actually more aligned. Not only does Google specially tailor a ton of its products for the iPhone (both with apps like Maps and Google Search, and specially formatted webpages), but its chief executive, Eric Schmidt, is on Apple’s board of directors. And don’t underestimate the fact that both share a chief rival: Microsoft.

Recent demonstrations (video below) have proven that the G1’s screen and Android are capable of handling multi-touch, so some people seemed confused that Google and HTC (which makes the G1) wouldn’t implement it. Now we know. The larger question going forward is, will multi-touch become important enough that Google has to include it in Android? After all, there are going to be a ton of Android-based phones come out this year, many that just have large screens like the iPhone (and get rid of the G1’s crappy keyboard). You can bet there will be pressure on Google to include multi-touch support in Android — especially after the Pre comes out.

On an related side note, the Android team member also confirmed that Intel has a massive effort underway related to Android. We reported at the end of last month that Intel was prepping to help with a large rollout of Android-based netbooks, possibly as soon as this year. It’s still not entirely clear what specifically Intel is doing on its end, but despite what some may think, it is heavily involved, our source contends.

Intel has been backing the Moblin project (mobile Linux), and it has now shifted its focus onto Netbooks for this year, jkOnTheRun’s Kevin Tofel noted recently. It seems that in some way it wants to be involved with Android too (though, Tofel noted in our comments on the other post that Android likely runs better on ARM architecture rather than Intel’s).

Our source confirmed that many different Android netbooks, as well as other Android-based projects are in the works. And that China is a hotbed for Android-based activity right now.