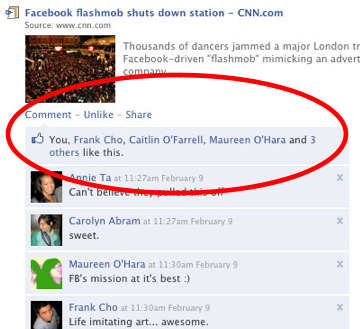 Facebook has been watching “lifestreaming” site FriendFeed closely, and today the larger company’s attention has resulted in a new FriendFeed-like feature in its news feeds. It’s a button called “like,” and it’s a one-click way to show your friends that you liked a link to a news story or other item. On FriendFeed, it’s called “like” with a smiley face. On Facebook, it’s a thumbs up.

The feature’s pretty self-explanatory on FriendFeed, and it’s just as easy to figure out on Facebook. As Oscar Wilde once put it, genius steals.