Much is made about Apple’s seemingly nonchalant attitude when it comes to the Apple TV. Several times, the company has dismissed the service as a mere “hobby” rather than a core businesses like the Mac, the iPod and the iPhone. But a new survey Apple put out this week, and a new Valentine’s Day themed promotion suggests the company is looking at the device with a more serious eye now.

And it makes sense, because as I detailed last week, the device is really at a crossroads. The next steps Apple takes with it will be critical for its ultimate success, or failure.

That process is illegal for DVDs, even though it’s legal for music CDs. Some would argue that a big reason for iTunes’ and the iPod’s initial success was that they made it very easy to stick a CD in your computer and rip music from it. Lord knows I did that with some 100 CDs when I was younger. It can be done with DVDs as well, but the process takes a lot longer and requires a piece of third-party software. 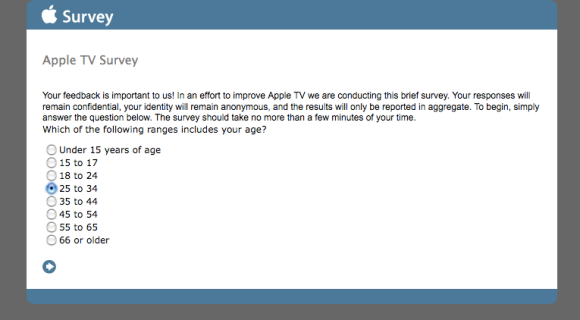 Today also marks the opening of a new promotional area of the iTunes store that proclaims the Apple TV is “The Perfect Valentine.” The promo is one of the biggest pushes by Apple yet to sell the device.

If we see a commercial next, we’ll definitely know that Apple is expanding beyond the “hobby” rhetoric. Last month, Apple chief operating officer Tim Cook revealed that the Apple TV sold more than three times the number of units it sold the year prior. Apple at least looks interested in continuing that trend.