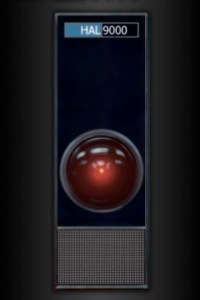 By far my favorite application on my Chumby personal widget device is the HAL 9000 app. It takes one of the truly great movie villains of all time from 2001: A Space Odyssey, and puts its glowing red eye on a screen while it talks to me in that terrifyingly monotone voice. It freaks out guests in my apartment — I love it. That’s why I’m shocked that it’s taken this long to come to the iPhone.

But it’s finally here, thanks to developer Jonathan Mulcahy, who has created a very simple app that just includes a picture of HAL and various sounds clips of his famous sayings. As you might imagine, when you touch HAL’s red orb, he speaks.

There is one other app based on HAL in the App Store, but apparently it’s just for taking notes. What I wanted was exactly this, a simple replication of HAL.

I’m not sure of the legality of such an app, but I would assume that MGM, which released the film, could ask Apple to take it down, just as Nintendo recently asked Apple to take down the unofficial Duck Hunt game. So if you’re a 2001 fan, or just a fan of being creeped out by odd male voices, I’d get this app now. It’s $0.99 in the  App Store.

Update: A reader let me know that it would probably be Warner Brothers that would pursue a takedown since it own most of the MGM catalog prior to 1986 [thanks James].