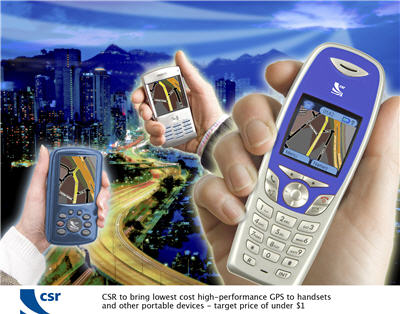 The newly combined company will be a powerhouse in wireless and global positioning system (GPS) satellite navigation chips. CSR, based in Cambridge, England, makes wireless chips such as Bluetooth radios, while Sirf, based in San Jose, Calif., makes GPS chips.

The $2.06 per share price is a steal made possible by the weak stock market. CSR paid a 91 percent premium over yesterday’s closing price, but CSR winds up with the $116 million in cash on Sirf’s balance sheet. That means it’s acquiring the company in effect for just $20 million in stock.

Sirf lost $398 million in 2008, compared to a $10 million loss in 2007. Revenues in 2008 fell from $329 million to $232 million. CSR will use the Sirf chips to further integrate more functions into its radio chips for smartphones and personal navigation devices.

Sirf shareholders will receive 0.741 of an ordinary share in CSR for each share, giving them a 27 percent stake in CSR. CSR reported that revenues for 2008 were $694.9 million, down $153.7 million from a year earlier. It reported a loss of $6.4 million, down from a profit of $155.6 million a year earlier. Combining both company’s revenues would yield about $927 million in 2008 revenues.

The deal is expected to close in the second quarter. Both company boards have approved it. You can credit the deal to the march of Moore’s Law. As chip manufacturing advances, you can put more transistors on a chip. That means chip makers can continuously add functions to the same size chip. In this case, it’s not hard to see how CSR can put a bunch of different radios, including GPS navigation, on the same size chip.

Both companies expect they can get cost savings of $35 million in the next 60 days by reducing research and development, sales, marketing and overhead costs. Combined, both companies will have $378 million in cash. CSR is traded on the London Stock Exchange, while Sirf is on Nasdaq. The deal is subject to regulatory approvals. One of Sirf’s major shareholders is Dado Banatao, chairman and an active venture capitalist.