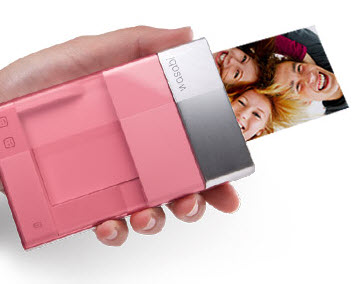 Zink Imaging is steadily expanding its reach for its inkless printing technology as it announces that licensee Dell has released its Dell Wasabi PZ310 Ink-free Mobile printer.

Bedford, Mass-based Zink Imaging figured out how to print without inkjet cartridges by embedding dried ink in paper. It heats the ink in precise locations to form an image. This new technology works especially well in creating mobile printers for devices like iPhones, where a normal printer is just too bulky.

Zink focuses on manufacturing the paper and licensing the system to its customers. Dell’s version is available now on Dell’s web site in pink, blue and black. The device weighs just seven ounces and can fit in a pocket.

Wendy Caswell, chief executive of Zink, said the Dell deal shows the company is executing its strategy of getting multiple devices with multiple brands.

This is the fourth product based on Zink’s technology to hit the market. While printer makers such as HP make a ton of money selling ink, Zink hopes to make money with its paper, which is an advanced composite material embedded with yellow, magenta, and cyan dye crystals.

The Wasabi can print two-inch by three-inch pictures that users can peeled off and use as stickers. It works with a wide range of devices, including digital cameras, camera phones, netbooks, and laptop computers. It’s essentially just like the old instant film cameras from Polaroid, where Zink’s founders worked.