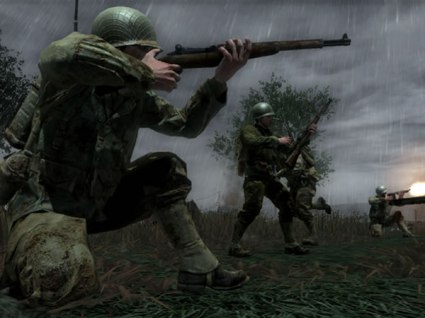 Video game publisher Activision Blizzard lowered the forecasts today for its 2009 earnings targets, sending its stock down in after-hours trading.

Activision shares dipped five percent and are now down about 1.4 percent to $9.48 a share. But the company reported better-than-expected earnings for the holiday quarter, which was driven by strong sales of its Guitar Hero World Tour and Call of Duty World at War games.

For 2009, the company forecasts it will earn 61 cents a share on revenue of $4.7 billion. That includes a $400 million currency impact and a $200 million reduction in revenues due to co-publishing and distribution businesses. Analysts had been expecting 67 cents a share and $5.17 billion in revenues for 2009, according to Reuters.

Fortunately for the industry, Activision Blizzard isn’t planning to join the ranks of companies doing “wholesale layoffs” this year, according to chief executive Bobby Kotick. Other companies such as Sega, THQ and Electronic Arts are in the midst of cutbacks.

In the fourth quarter, the Santa Monica, Calif.-based company lost $72 million, or 5 cents a share. If you take out one-time items, profit was 31 cents a share. Analysts expected 29 cents a share. Revenue was $2.3 billion in the quarter, above the expected $2.15 billion.

The Blizzard part of the company provides its financial backbone. Its World of Warcraft game is still a top seller, and it has 12 million paying subscribers.