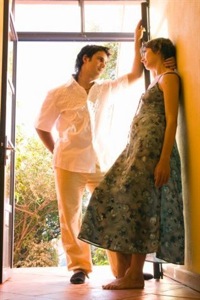 The iPhone may be an incredibly useful and flexible tool, but there’s one thing it can’t do that well — flirt. At least that’s what mobile content company FunMobility found when studying the usage of its America’s Best Mobile Pix application.

APIX lets people upload mobile photos, rate them, submit them to contests like Hottest Girl and Hottest Guy, and, yes, send each other flirtatious messages. During the month of January, users of both the standard mobile application and the APIX iPhone application sent a combined 635,000 messages.

But it turns out iPhone users were doing a lot less flirting. The average iPhone user sent 60 messages a day, while everyone else averaged 175 messages per day. In the announcement, chief executive Adam Lavine says he expected the study to show the iPhone’s potential as “a mobile dating platform” but instead found the exact opposite.

So what does that mean? Should you toss out your iPhone if you want to get lucky with an attractive guy or girl? Well, maybe. But keep in mind that this study tracked a specific group of people (APIX users), not the general public. And of course there’s the whole “correlation is not causation” issue — just because people don’t use the iPhone to flirt doesn’t mean there’s anything wrong with the iPhone. Plus, I’ve never used APIX, but 60 messages a day still seems like a reasonable amount of flirting.

Oh, and if this whole mobile flirting thing isn’t working for you, you could give real life a try. Hey, maybe you could head to Taylors, South Carolina, where the hottest girls come from, according to FunMobility, or Bethany, Illinois, where you’ll find the hottest guys. Or you could find a local spot with the help of Google’s new map for love stories.