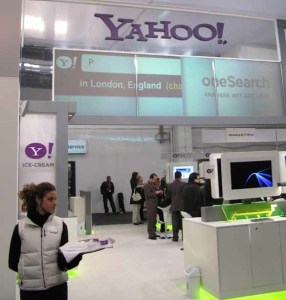 At last year’s Mobile World Congress, everyone wanted Yahoo’s ice cream. You see, no one had a legitimate application store yet, the iPhone wasn’t 3G and Android didn’t even exist. Yahoo’s oneConnect was one of the most buzzed-about parts of last year’s show — and its booth, with free ice cream, was crowded. What a difference a year makes.

This year at MWC, Yahoo has more announcements, but when you read about what they are, it’s hard to think of anything besides two syllables: ho-hum. The company is consolidating its mobile experience under the new moniker Yahoo Mobile, which it probably should have used from the start. The goal is to bring a “highly-personalized” interface to all of Yahoo’s various mobile properties, tailoring them for smartphones. The mobile web version and the iPhone version will roll out in March, with versions specifically built for other platforms coming in late May.

So what exactly are Yahoo’s mobile properties? Well there’s a whole list of things you can find here under various names (now you see why they rebranded and bunched together the whole lot), but the most useful ones are oneSearch and oneConnect, which bring you Yahoo Search and let you access things like your email, address book, calendar and messaging on your mobile device, respectively. 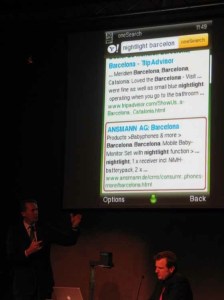 It’s great that these will now be easier to navigate on your mobile device if you use Yahoo’s products, but increasingly, there are a lot more attractive options available. For example, since Google built the Android platform, its Gmail email service and Google Talk instant messaging service are built into that operating system and work seamlessly. Likewise, on the iPhone, with MobileMe, email and calendaring is all synced up by way of Apple’s servers no matter where you are. (And Google is also offering some pretty nice sync options if you don’t use MobileMe.) And on Windows Mobile devices (now just called Windows Phones), you can easily use all of Microsoft’s options for the same services.

The problem is that Yahoo has no true mobile platform that serves as the backbone of emerging devices in the mobile space. So if you want to use something like Yahoo Mobile, it’s going to be tacked-on. Yahoo is trying to change this a bit by partnering with the Opera Mini 4.2 browser to integrate these services, which is smart, but still, that is also tacked on. And with the improvements that have been made to mobile platforms like Windows Mobile, users may have less of a reason to use those tacked-on elements.

This year, there is no line at Yahoo’s booth at MWC, VentureBeat’s man on the ground, Matthaus Krzykowski, reports. Everyone wants to talk about the sexy platforms and the exciting new phones — neither of which Yahoo is heavily involved in. And no one seems to care about the free ice cream.