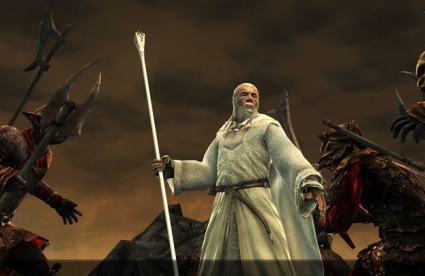 I’ve just finished playing the single-player campaign of Lord of the Rings: Conquest, developed by the Pandemic Studios division of Electronic Arts. And I think the game highlights a tough question for game developers: How do you make a game challenging enough for veteran players without frustrating them?

Lord of the Rings: Conquest is based on a license from the Saul Zaentz Co., which has the game rights to J.R.R. Tolkien’s fantasy book series (my favorite of all time), and the images from the Peter Jackson film series. 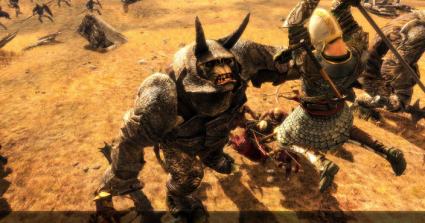 There aren’t any more Peter Jackson films coming soon (although there might be a Hobbit film one of these days), so EA is valiantly trying to keep this franchise going for gamers. The plot of the game strings together a series of battles that occur during the War of the Ring, some of them depicted in the movies but many of them not.

It’s all about brawling with the dark forces of Middle Earth. You start in a training mission where you fight Sauron in the great battle at the end of the Second Age. Then the game starts at the beginning of the War of the Ring in the Third Age. The first battle is Helm’s Deep, where you have to defend the walls of the fortress against the orcs and Uruk-Hai of Isengard. You can choose from four characters: archer, scout, wizard, or swordsman. Each has different capabilities, and you can switch between characters in the middle of the battle if you’re near a base. You can also play the campaign from the Evil side.

The basic game play is fun. You can zap your enemies from afar with the wizard’s staff or engage them in hand-to-hand combat. The graphics are pretty on the Xbox 360 version. You wander around the battlefield and vanquish enemies any way you want. (You can also play it on the PC, PS 3, or a lighter version on the Nintendo DS). 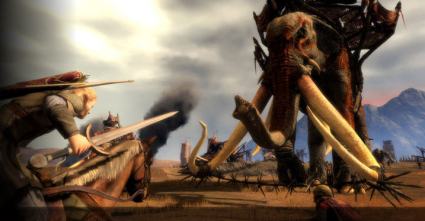 You can fight the orcs by mashing the X button on the controller as much as possible. But you do better if you learn how to use all of the buttons and change your tactics to suit each kind of enemy. Sometimes the orcs surround you and you deal them a power blow all at once with the Y button. This part of the game play is familiar to those who have played EA’s Lord of the Rings games for years. One of the great things is that Pandemic made it much easier to shoot an arrow, simply by aiming and pulling a trigger. (That makes the game easier to play and more accessible to a wider audience).

But you have to switch characters often to get through the battles. In the Mines of Moria, there is no point trying to get past the gauntlet of orc archers and trolls when you can play the scout, make yourself invisible, and sneak past the guards. When you hit certain high points in the battles, you can become a hero character, such as Gandalf the wizard and do extra damage to the enemies. And some of these boss fights at the end of the levels are really difficult. 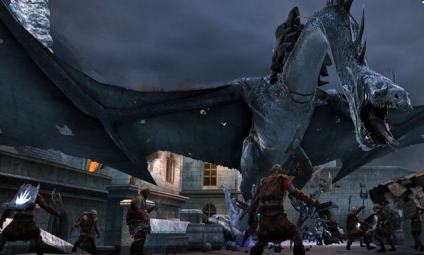 But that brings up my complaint. There are no save points in the game that are automatic. You either win all of the battles in a particular location or you have to start over from scratch. I literally had to play some of the levels dozens of times because I kept expiring before I finished the level.

Some gamers might find this challenging. It’s a great feeling when you finally fell the Balrog or defeat the nazgul of Minas Morgul. You are rewarded with 25 achievement points via Xbox Live when you achieve victory on each level.

But it’s also really annoying. Why can’t I keep restarting the game at the point where I last fell rather than at the very beginning of the level? There is a history here that goes back to the very first Peter Jackson Lord of the Rings game that EA made. Same problem. Not enough save points. No way to save the game along the way. So you have to trust your luck and make sure not to make a dumb mistake.  It changes the way you play the game. You’re more conservative, making sure you don’t lose too many lives in the early part of the level. 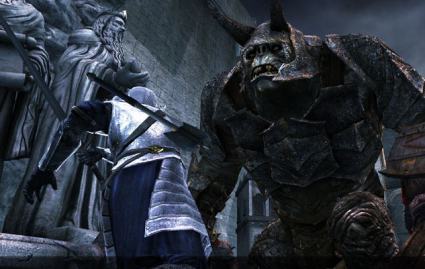 It’s the single-player equivalent of grinding, a common complaint about the mundane tasks of leveling up in online games like World of Warcraft. It’s like those frustrating horror films where the filmmaker manipulates the audience by making the characters so dumb. (Like, “no, don’t go in that dark room, don’t go in that dark room, but the dumb character goes in the dark room and gets beheaded). Those films keep you on the edge of your seat. And I have to say that this game kept me on the edge of my seat. But not in a good way. I just kept on getting up over and over again, each time I was whacked down. Game developers have come to think of this as fun. They toy with us players. But there are certainly a lot more things I can think of that are more fun than overcoming something so hard that should be so simple. As long as Pandemic keeps making games this way, a certain kind of gamer will like it. But this kind of game play isn’t accessible. You want to reward your players, not punish them over and over again. You want to make long games where they can go on fighting forever, not make a small number of levels that are so exceedingly hard to get through.

I played the game on the Heroic level, not the higher Legendary or the lower Casual levels. But the game really ought to sense how well I’m doing and adjust itself to my level of play. This kind of self-sensing game has been talked about for a while, but it’s still not here in 2009. I think that the more accessible and the more self-aware these games are, the bigger the audience will be.

Among critics, the game was panned. It scored 56 points out of 100 on the Metacritic.com site, which aggregates review scores. Fans liked it a little better, rating it 7.6 out of 10. Kotaku pointed out that the artificial intelligence of the enemies is weak, and I’d have to agree.

You might say that there’s no point making a Lord of the Rings game more accessible. Only the hardcore Tolkien gamers will play it anyway. But I think that’s a cop out. The game developers who favor the frustration-style game play will find their audiences going elsewhere for more enjoyable game play, even if there is a strong loyalty to the game franchise. There’s a broader lesson in this for everybody.