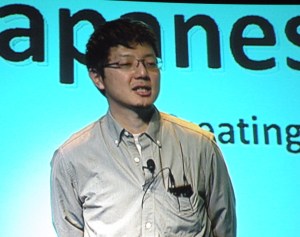 Japan is a shrinking part of the video game market, with software sales now trailing behind the United Kingdom. It’s about six percent of the global market, and sales are shrinking on an annual basis.

Can the Japanese succeed outside of Japan? Jun Takeuchi, executive producer of Capcom‘s upcoming Resident Evil 5 game is addressing the question at the Dice Summit in Las Vegas. He can speak to this topic from experience, because the Resident Evil series has spawned a bunch of hit games and movies. Capcom has also just launched the latest installment of its famous Street Fighter series, with considerable critical acclaim. But not every Japanese game that Capcom or other Japanese publishers make can be translated on a global basis.

Japan-based Nintendo has succeeded with the Wii and Nintendo DS, but Japan’s role on the global stage is weakening.

Sega has encountered weakening demand for its Japanese-oriented cute mascot character games, and over the past four years it embarked on an acquisition binge, buying Western game developers. In the meantime, Korean and Chinese game makers are making a lot of headway with online games.

Among the problems: the Japanese make culturally focused games such as the Onimusha samurai games which appeal to only a narrow market outside of Japan. It doesn’t help to add a layer of Western culture upon such games, which Takeuchi said was no more than “dyeing a game blonde.”

Takeuchi said his company also tried to make games specifically for the U.S. market, such as Shadow of Rome, with a lot of action and violence. The company got a lot of advice in the planning process from U.S. game developers. But that effort didn’t work out as well as they’d hoped, since the Americans felt their advice wasn’t taken seriously.

Taking risks is important to coming up with games with global appeal, Takeuchi said. A strategy of “risk reduction,” where a publisher makes a game that will appeal to a Japanese audience, actually increases risk, since the Japanese market is so small. Takeuchi belittled excessively regional thinking.

Japanese movies such as Godzilla or Akira Kurosawa’s films were once successful worldwide, but now the Japanese film makers reduce their risks by focusing on the Japanese market at the expense of making the films globally appealing. In contrast to movie makers, Nintendo’s focus on making globally appealing games has for many years kept Japanese games in the forefront of the global industry.

Yet within those limitations, Takeuchi believes that the company should shake up its internal organization often in response to shifts in the market. Capcom, for instance, shifted its Dragon Quest game series to the Nintendo DS when it was clear that the Nintendo portable game player was dominating the market. Takeuchi believes that the developers themselves should shake up the company from the bottom up.

Capcom has a lot of big game properties, and it shoots for original topics for about 20 percent of its games. That has given rise to new franchises such as Lost Planet and Dead Rising, which were both developed with the European and U.S. markets in mind. His main point, which isn’t brilliant, is to make games users enjoy.

Takeuchi said there are no borders to fun. He said that while he was developing Resident Evil 5, he fell in love with Take-Two Interactive’s BioShock, one of the best games of 2007, and a game that translated well to the global stage even though it was developed by Americans.

Of course, we all know the unspoken secret here that Capcom discovered long ago. Everyone loves shooting zombies.