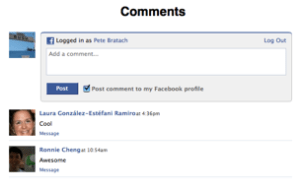 Facebook’s Connect service already lets users comment on news articles and other web-wide content using their Facebook identities. Now the company is taking another step, by letting web publishers install the actual Facebook comments interface within their own sites. For web publishers who just want their comments tightly integrated with Facebook, this could help drive up interaction on their sites. Connect isn’t just a distributed identity service, it shows your friends on Facebook where you’re leaving comments, potentially getting them to check an article out, too.

From VentureBeat’s perspective, we use Disqus, which comes with its own set of features, like threading comments, spam filtering — and Facebook Connect integration. So I’m not sure why we’d use this new widget.

Still, it looks pretty interesting. Here’s more on how it works, from a company blog post on the new feature:

I’m interested to see that last part works. While this is somewhat like what another commenting service, IntenseDebate (recently purchased by Automattic, the company behind the WordPress blogging platform) offers with FriendFeed integration, some comments on Facebook certainly aren’t intended to be made public.

In the post, the company also notes that more than 6,000 developers have used Connect, and sites with Connect integration have seen up to 50 percent increases in comments.