The downturn finally hits HP — The company announced a 10 percent drop in earnings yesterday and plans to cut salaries. CNet has more.

Yelp accused of extortion, again — Local business owners report that the trendy review site offers to hide negative critiques in exchange for cash. And it’s not the first time Yelp has been called out for this.

Apple hogs flash RAM for the next iPhone — Apple Insider reports that Apple has been gobbling up flash RAM supplies to prep for the iPhone’s next incarnation, actually raising the spot price for memory. 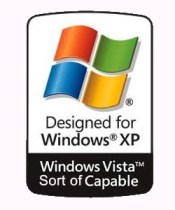 No more class action in Vista lawsuit — The judge presiding over the Microsoft Windows Vista Capable lawsuit reversed her earlier decision to turn it into a class-action. The plaintiffs in the suit claim that Microsoft wrongly advertised that Vista would run on their new “Vista Capable” XP machines.

Disney buys kid-friendly Kerpoof — The design suite for youngsters sold for an undisclosed amount. Disney plans to integrate its technology into its homepage. More from TechCrunch.

Facebook Chat sees some action — Engineer Chris Piro notes that more than two-thirds of Facebook’s 175 million active users have used its chat function. A sign that the once shaky system has become more reliable, perhaps?