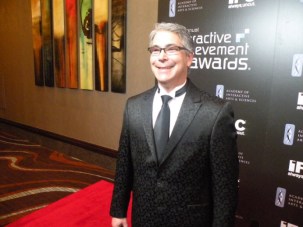 The Interactive Achievement Awards at the Dice Summit represents the industry’s chance to get excited about what it does and to give away the equivalent of the Oscar to its best game developers.

The awards show is always an interesting place to observe the state of the video game industry. Nominees include the first iPhone games (Apple was invited to speak, but didn’t send anyone). While the crowd is at capacity and happy to be employed, everyone is nervous about the economy.

Joseph Olin (right), president of the AIAS, said that the eighth annual Dice show is sold out with more than 500 attendees, and that he was relieved that game industry executives and developers are still willing to attend and support such a high-end conference in spite of the recession. Industry sales, while slowing compared to the past, continue to grow — they were up 13 percent in January.

A bunch of game studios have been laying off employees for months now. Dice’s board had to go through a bunch of speakers, many of whom, like lifetime award winner Bruce Shelley (designer of Civilization and Age of Empires), had lost their jobs in the midst of the closings. One member of the audience asked John Riccitiello, chief executive of Electronic Arts, why so many companies are closing studios when sales are still growing. He replied that costs were growing even more than sales for many companies. 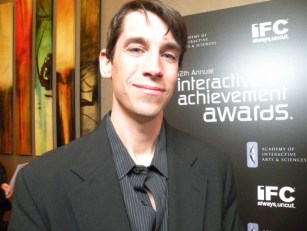 The nominees for the awards walked a gauntlet of TV cameras and paparazzi (including me). Ted Price (right), head of Insomniac Games and creator of Resistance 2, said that all eyes are on the game industry now because it is one of the few sectors holding their ground through the recession.

“We see more strong games coming this year,” he said.

But when asked if game sales would hold steady, Price said he has no idea.

Jay Mohr, the actor and comedian who emceed the awards (which will be televised by IFC, owner of the Sundance Channel) for the past four years, joked about how there were a lot of geek millionaires in the audience who were getting their revenge on those that had made fun of them. Mohr told me that when he walks through movie sets and sees actors and actresses in their trailers, they’re more likely to be playing games like Halo 3 than to be reading a book. (Hey, that’s progress, right?)

Evan Shapiro, executive producer at IFC, said that the awards show is the place to find the next great artists. However, he warned that game companies should continue to support indie developers to avoid the trap of having too much power concentrated in a few hands — like what happened in the film industry. 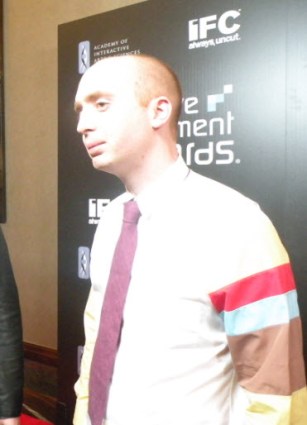 It’s interesting to see indie developers getting awards amid the giants. 2D Boy, a two-man outfit that made their popular World of Goo game sitting in coffee shops in San Francisco, won the award for best game design. One of the other big winners of the night was Little Big Planet, developed by Media Molecule in England. Alex Evans, co-founder of Media Molecule (right), had to run up on stage over and over again. Little Big Planet won console game of the year and best overall game of the year. Evans promised he had some big things cooking.

But the line of the night came from Glen Schofield of Electronic Arts, whose game DeadSpace won the award for best action game: “I’d like to thank EA, who let me make a game on dismemberment.”