Yammer, the company that offers a Twitter-like micromessaging service for businesses, has released a wide-ranging set of new features today that make it even easier for coworkers to communicate. Perhaps most prominently, the company now lets you import, share and discuss RSS feeds from other web sites. This means you can track anything from news reports to competing companies’ blogs to others’ Twitter messages.

For those who aren’t familiar, Yammer works by letting you send short messages back and forth with your colleagues, with messages displayed on the site’s interface in reverse-chronological order. When you post messages to Yammer, anyone at your company who has chosen to “follow” you will see the message. The company’s not just trying to make communication more efficient, it’s trying to help people see information they might have otherwise missed.

Facebook and FriendFeed are also offering feed services, which increasingly can also be used to improve workplace communication and information discovery. At VentureBeat, for example, we use a private FriendFeed room to easily track RSS feeds and share comments about the stories we’re working on. More on that in a moment.

Yammer is also releasing a way to — like Twitter — send private messages to other individuals in your Yammer group, and mark your favorite messages with a star. The company recently released a version of its software that companies can host on their own servers (as identi.ca and other competitors also do); today, Yammer is further allaying corporate security concerns by letting companies set their own terms of use for the site. 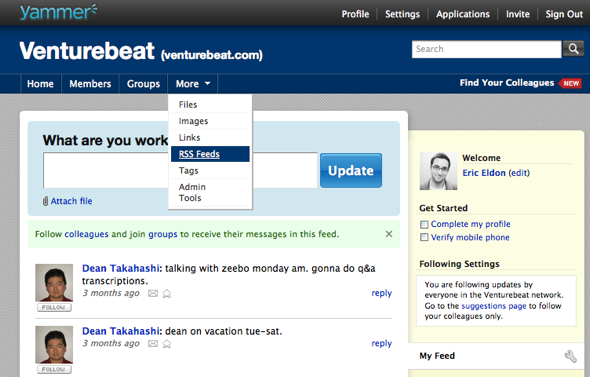 Yammer works by only letting users within a specific email domain (like user_email@venturebeat.com) create and join Yammer groups; the company is furthering that functionality by letting you create email lists from those groups. It is also letting you read those messages through SMS or instant message. At VentureBeat, the FriendFeed room has been especially useful because we can integrate it with Gmail’s Gtalk IM service. Although Yammer said it turned off AIM integration due to a technical issue, you can use Yammer with Gtalk or another Jabber-based IM service. We’ve been saving ourselves a lot of time by using the FriendFeed room to share feeds and other items from around the web — and comment on everything from within Gtalk in Gmail. It cuts down on distracting, extraneous conversations that group chat services like Campfire tend to encourage and focuses us instead on reading and writing stories. Yammer is looking like an increasingly competitive alternative.

West Hollywood, Calif.-based Yammer raised $5 million in a first round of funding from Founders Fund and Charles River Ventures last month. Micromessaging in the workplace is becoming increasingly common — check out Yammer’s testimonial page for more on that. It won the TechCrunch50 top new startup prize last fall. Twitter and Facebook have themselves discussed how to tailor their services for businesses, and so has FriendFeed — so Yammer’s new features may help it define itself to business users before these larger players decide to move in.