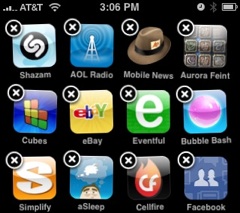 When you have nine pages of apps on your iPhone, it’s basically impossible to try to reorganize them. Sure, you can do it manually on the phone, using the “wiggle” method (when touched for a few seconds, apps wiggle, indicating you can move their icons), but when you move an app to a new page, if that page is already full, it pushes the last app to the page before it. So if you really want to rearrange things, you first have to pre-arrange icons so that ones you want to stay on certain pages don’t get moved. If that sounds like a mess, it’s because it is. And just to further illustrate it, a concept video for how app management should be handled has popped up on YouTube.

The video, first posted on Gizmodo, features some things that iPhone users absolutely should have when it comes to app management, considering how closely the iPhone is tied into the iTunes desktop software. For example, you should be able to drag to select multiple apps at one and move them all at the same time. You should also be able to “lock” certain apps to stay in the same position even when you move other ones and to sort apps, both alphabetically and, most importantly, by “Most Used.”

Even if you don’t have nine pages of apps, a solution like this would be welcomed by everyone — it’s one of those things that just makes sense. And if Apple anticipates that the App Store will keep growing — it has over 20,000 apps now, though it won’t yet confirm that figure — it’s simply going to need a better system of management for purchased apps.

Of course, I’d bet that Apple realizes this and is working on some kind of solution of its own. A few months ago when I complained to the company at an event about the lack of an easy way to go back to the first page of apps if you’re on the ninth, an iPhone development team member sort of smiled and said they recognized that problem. Two days later Apple rolled out the solution (clicking the home button to go back to the first screen).