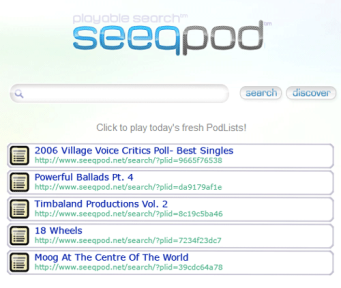 EMI and Capitol Records have jumped on the bandwagon, filing suit against music search engine SeeqPod for copyright infringement in New York. They’re following in the footsteps of Warner Music Group, which took action against the site in California in January 2008. There has yet to be a settlement in that case. But EMI and Capitol have upped the ante, targeting individual employees and investors, in addition to the company itself, for monetary damages.

Instead of naming SeeqPod as the only defendant, the suit also lists its chief executive, Kasian Franks, and backers Raf Podowski and Shekhar Lodha as individuals. The record companies are seeking billions of dollars in damages — more than any of these people could reasonably pay. In doing so, they hope to send a strong message to technology executives profiting from music sharing services that they consider to be illegal. Despite the pressure, SeeqPod says it will stand firm, and continue with business as usual for the time being.

Whether or not operations like SeeqPod are in fact illegal is still up for debate. SeeqPod allows users to search for songs, bands, and other media, and aggregates results that they can then view or listen to directly on the site. The record companies argue that the site pools many pirated and illegally-downloaded sources of music. There is admittedly no major effort to screen them out.

But the only readily-obvious difference between SeeqPod and search giants Google, Ask and Yahoo is that the results it yields are more relevant, and a music player is provided. SeeqPod is quick to point out that a Google search for U2 would provide playable files as well. And in it’s favor, the music its users access is only playable on the site, not downloaded directly to their systems for free like it might be through other sites. On top of that, conclusions reached in talks with Warner suggest that SeeqPod is not breaking the law. Foremost, that engines like Google and Yahoo are protected in this respect under the Digital Millennium Copyright Act (DMCA).

A representative from SeeqPod says that the record companies appear to be grasping at straws with this newest action, and that the tactic of targeting individuals is inappropriate. She also argues that the site is actually more helpful that harmful to the flagging traditional music industry — helping fans discover new bands and songs that they might then buy on iTunes or go to see live, much like popular Pandora Radio. To this end, the site occasionally provides links for users to purchase what they’re listening to on Amazon. It has extended an offer to partner with Warner to help it adapt its business to the web, and will probably do the same with Capitol and EMI.

Even so, the record labels and RIAA seem to be sticking to their guns, claiming that sites like SeeqPod really do take chunks out of profits. It will be interesting to see if the shifting attitude of the courts impacts how they approach copyright disputes in the next couple years.