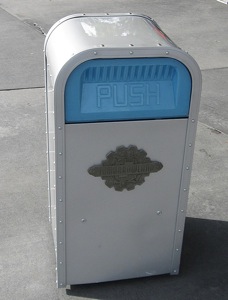 We’ve been waiting for Push Notification, Apple’s solution for enabling notifications without having third-party apps running in the background on the iPhone, for so long now, that consumers have either forgotten about it or are skeptical it will ever come at all. And developers are apparently so sick of waiting that they’re coming up with their own solutions.

AOL’s AIM instant messaging application launched on day one in the App Store back in July of last year. Unfortunately, while the app itself is good, it’s extremely hamstrung on the iPhone because it cannot run in the background. This means that if you want to use it, it has to be open at all times, which prevents you from running other applications or doing anything else on your iPhone. But a new update released today uses the backbone of the AIM service to work around Apple’s limitation.

You now have the option to have AIM keep you logged in for up to 24 hours after you close the actual application. This means that even if you’re not actually present on the network, AIM will think you are and will keep receiving messages you get as if you were. While that might be pointless by itself, the use of SMS really makes this work. AIM will send you a text message when you get a message, and you can respond to it, sending an IM by way of SMS back to the person who messaged you.

Of course, this is a similar solution to something that has worked on AIM and other instant messaging networks for some time, SMS forwarding, but the app makes it a clear and easy solution for iPhone users who want to use instant messaging the way it should work on the device. 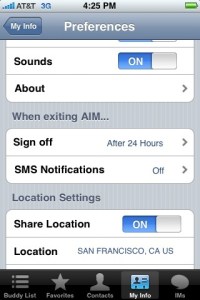 Unfortunately, there is a downside: You’re going to be charged by your carrier for these SMS messages. But seeing as most people now have unlimited or high-limit SMS plans, it shouldn’t be too big of a deal. And the AIM app actually makes it easy to bypass the ridiculous costs associated with sending text messages by allowing you to send them right through the app to your contacts.

There are other updates to the AIM app as well, most notably that it’s been changed to AIM Free, which is now ad-supported. A new AIM Paid version should be coming to the App Store shortly. Ars Technica has a bit more about that.

But to me, the real story here is that AIM has been able to get a service that is fairly similar to Push Notification up and running before Apple has. Apple’s was originally promised for September of last year, but difficulties have pushed (no pun intended) its release off indefinitely. There is talk that Apple may instead be looking into simply allowing certain apps to run certain tasks in the background of the iPhone. If the company can release an iPhone with better battery life at some point this year, that could well be the case.

Apple rolled out some updates to its MobileMe service today to improve stability. Now that it has been able to stabilize that service after a rough launch, perhaps there’s hope for Push Notifications yet. But for now, it’s clear that developers and customers alike are sick of waiting.